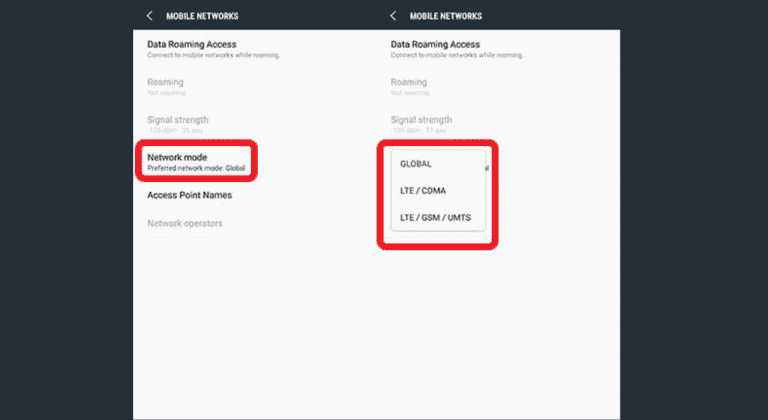 What’s the difference between global network mode, LTE, and CDMA? What exactly is a global network? Why does my network work better on one mode than the other? And which mode should I choose?

The above are questions often asked by phone and internet service users. But without mincing words, a global network mode is what it sounds like. It is any network communication that is capable of covering the entire globe. It is a network mode that looks for a GSM signal where roaming agreements are available. On the other hand, an LTE mode is the 4G network, while the CDMA mode is a 3G data connection.

This article will explain more about what a global network mode is and how it functions alongside how to configure your mobile in different network situations, among other related issues.

What Is Global Network Mode?

This is a network mode in your mobile that uses a communication network that covers the entire globe. Global implies that your phone will look for GSM/signals where they have roaming agreements when an LTE signal is not present.

What Is Network Mode? A Look at the Different Options and How They Work

Network mode influences the speed at which you can access the internet (browse or download) from a device.

They explain the different features of wireless signals and are similar to AM and FM frequency modulation in radio stations. A mode can describe the operating frequency, range, and data rate. Some of them include:

The 1G network first appeared in the 70s. It is the first Generation of mobile networks, but is only dedicated to voice calls based on so-called “analog” technology. This is unlike the following generations of mobile telephony (2G, 3G, 4G, 5G), which use “digital” technology.

However, 1G has many shortcomings – poor mobile communication service, unsafe (unencrypted calls), and expensive. The 1G network started to give way to 2G in many countries around the end of the 80s. It is now obsolete.

The Second Generation of mobile networks, 2G, is based on GSM. 2G radio signals are digital. It is achieved when multiple users can use a single network/channel through multiplexing. During the 2G era, cell phones can use data and voice. Some characteristics of 2G include:

It combines some parts of the 2G network with new technologies and protocols for faster data delivery. The speed can be as high as 13 Mbps due to packet switching. With a 15 to 20 MHz bandwidth, it operates at a range of 2100MHz. Other features include:

The significant difference between the 3G and 4G networks is the data rate and the technology used. The leading technologies that make 4G possible are Multiple Input Multiple Output (MIMO) and Orthogonal Frequency Division Multiplexing (OFDM). The key standard here is WiMAX and LTE.

Although 4G is seen as the predetermined standard for network connection, 4G LTE is the path to achieving that predefined standard. Some features of 4G LTE are:

Although 5G is still developing, some mobile phones have adopted this technology. It works on rarely used radio bands ranging from 30 to 300GHz. Testing has shown that it can cover distances as far as 500 meters away from the tower. One prominent feature of 5G is low latency which is about 1 to 10 seconds and 60 to 120 times faster than the average 4G latency.

Which Network Mode am I to use? Global, LTE/CDMA, or LTE/GSM/UMTS?

GSM/UMTS, CDMA/CDMA200, and LTE are mobile standards built to work on different networks. GSM/CDMA was used to move to a 2G network, UMTS and CDMA2000 are used to transition to 3G, while LTE moves CDMA/CDMA2000 and GSM to 4G

How to know what network mode I have?

All mobile phones do not have the same user interface, so where you will find network mode on your phone may be different from other mobile phones.

Read also: Why Does My Phone Say LTE Instead Of 4G or 5G?

By definition, the Global network mode covers the entire globe, while LTE is a cell phone standard that defines the fourth Generation of mobile communication for CDMA and GSM networks.

Connecting to GSM networks with global network mode is easier, especially outside your region or location. Meanwhile, if no LTE infrastructure is present, you can’t connect to the network.

Global network mode can be found almost anywhere, while LTE is hardly found in underdeveloped countries

What does refreshing SIM data mean?

“Refreshing SIM Data” usually means that your SIM card is receiving an update, and your phone reads the updated data from the SIM to the memory.

This could also be that your SIM card or SIM card reader is faulty. You can verify this by trying out another sim card on your phone. You can solve this problem by:

How to change CDMA to GSM on Android

What is the best network model for Verizon?

5G LTE is probably the best network mode to use. But there is no straightforward answer to this question. If you want advanced technology, your best choice is Verizon 5G because of its high-frequency bandwidth, faster data speed, and low latency. However, assuming you are in a location with no 5G infrastructure, you should switch to the network available to get a stable signal.

Does Verizon use CDMA or GSM technology?

Which network mode is best?