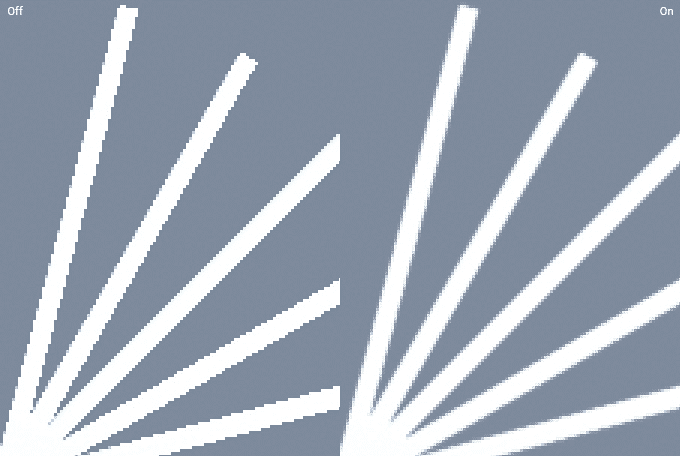 One of the most popular in-game settings is anti-aliasing. Pro gamers will tell you that you don’t want jagged edges, and that would have led you into a pretty lengthy, sometimes even more confusing conversation on anti-aliasing.

What Is Anti-Aliasing In Games? [It’s Real Meaning]

Anti-aliasing in gaming is a technique that is used to smooth jagged lines or textures by blending the color of the pixels with the color of an edge. You will easily notice anti-aliasing when playing games in low to medium settings as the edges of the objects are sharp and not smooth (what we refer to as jagged edges), this is a result of an anti-aliasing setting that is too low.

Anti-aliasing wasn’t a big deal for older games. There were no lightmaps, no shaders, no needs to go on some boring learning missions to understand what anti-aliasing is. But we are increasingly in demand for better games, and modern 3D games now have to rely on some form of anti-aliasing because, as you already know, we want more pleasing and realistic appearances.

There are four main types of anti-aliasing techniques:

We have the SSAA (super sampling anti-aliasing), which is the first type of anti-aliasing. The SSAA was mainly used on photorealistic images, but more of newer games aren’t using it anymore as it consumes a lot more processing power for today’s standards.

There is the MSAA (multi-sample anti-aliasing) which is one of the most popular types of anti-aliasing we find in newer games. The only downside of this one is that it doesn’t do anything other than smoothing the edges of polygons. While this reduces the demand on the processing power, when compared to the SSAA it really isn’t the most effective energy-wise and doesn’t solve the pixelated textures issue.

We also have the FXAA (fast approximate anti-aliasing) which consumes lesser power and smooth out all the edges on all parts of an image. Its downside is that it makes images blurry, and if you’re looking for a game with crisp clear graphics, it doesn’t do the job.

The fourth is the TXAA (Temporal anti-aliasing) which can only be found on newer graphics cards from companies like Nvidia and AMD. The TXAA combines different techniques to smooth out edges. While it does have some blurriness to it, it seems to consume a lot less power than other anti-aliasing techniques and is more effective in smoothing out image edges when compared to other older techniques.

Looking for an ultrawide monitors for gaming and productivity? Here are the best.

What Type Of Anti-Aliasing Do You Need?

While we have four popular types of anti-aliasing, there are only two that’s most widely used, and you should only concern yourself with one of these two. The first is the TXAA and the second is the MSAA.

If you’re using a more powerful PC, the TXAA is the best option for you. It does a really good job of smoothing out object edges, and it doesn’t demand a lot from your processor as long as you use it on a high-end PC. TXAA forces a high-resolution picture while scaling it down to fit your resolution.

If your PC isn’t as powerful, and you’re concerned about something that wouldn’t cause a performance dip, the MSAA is the best option. The MSAA beautifully smooth out edges without having a toll on your performance. You’ll sacrifice some graphics, though, as the MSAA causes a blurry effect, so your games don’t look the best, although this is still a mile better than having jagged edges.

As a side note, I will always recommend that you check your monitor resolution before deciding on any type of anti-aliasing. If you’re gaming on a 1080p 21-inch monitor, there is a chance you won’t notice aliasing, the same applies to when you game on 4k gaming monitors in fact, it’ll be very little if there ever is. But when you use 24-inch+ gaming monitors, aliasing could very noticeable.

Should anti-aliasing be ON and OFF?

It depends on the effect you want to achieve. You can turn ON anti-aliasing in games if you’re trying to get the best video quality. This is ideal for single-player games. However, if you’re in a competitive or online multiplayer game, it would be best to turn anti-aliasing OFF for better responsiveness and no lags.

Also, if your PC’s GPU isn’t powerful enough to run the game smoothly, turning ON anti-aliasing in games would strain it, causing the game to lag. Many old games do not need anti-aliasing to run smoothly, but it has become important for newer ones.

If you want a better video quality on your high-resolution screen while gaming, taking note of the power of your GPU, then turning ON anti-aliasing would be worth it. If you use a smaller resolution, there isn’t any need to turn ON anti-aliasing as the pixels would be stretched out over a small area, so a more responsive game is all you need.

The best anti-aliasing setting for World of Warcraft depends on how high-end or low-end your gaming PC is. However, Blizzard, the makers of WOW, have created options that create smooth gameplay for users regardless of the strength of their PC. The different anti-aliasing options are based on how smoothly pixels can be rendered without affecting too much of your performance.

The best anti-aliasing setting in World of Warcraft to choose from depends on your video card and the level of performance you want to achieve. Here is a basic overview of the anti-aliasing options:

A casual gamer can increase their anti-aliasing software to high, depending on their system’s strength. On the other hand, a competitive gamer in Warzone should either disable it or set it to Low to stabilize the fps and frame time and ease the load off the system’s resources.

How to make Genshin Impact run smoother on pc?

To improve your experience while playing Genshin Impact, you can make a few tweaks to your PC to ensure the game runs smoothly. But first, ensure you have the basics covered before we go into the specific bits and pieces.

You will need a good internet connection speed with high bandwidth, all your Windows updates installed, and ensure you don’t have any internet-demanding applications open. Using a wired internet connection like an Ethernet is better than a wireless one as wireless connections are more susceptible to interference and are less consistent.

When those have been covered, you can go to the following in-depth settings:

In the Details tab, find the Genshin Impact executable. It should read as as’GenshinImpact.exe’. Right-click it and choose Set priority – High, then click Change priority. This dedicates most of your system’s resources to Genshin Impact.

Look for the Genshin Impact shortcut on your desktop and right-click on it. A list should show; select Properties. Next, open the Compatibility tab and check the Disable fullscreen optimization box. Next, click Change DPI settings, click Apply, and then OK.

To do this, go to the website of your GPU or video card maker, find the driver version that is compatible with your Windows version, and download it. Once you’ve downloaded it, open the file and follow the instructions to install it.

The Windows 10 Game Mode is a feature that optimizes system resources whenever a game is run. It is supposed to make gameplay better, but some of its features sometimes make games lag and even lower FPS.

To disable Game Mode, press Windows + I to open Settings. Click on Gaming, and in the window that opens, select the Game bar from the left pane and toggle OFF the Record game clips, screenshots, and broadcast using Game bar. Next, select Captures. In the Background recording and turn OFF Record in the background while I’m playing a game. In the same left pane, toggle Game Mode ON or OFF.

Where to find Windows 10 anti-aliasing settings

Windows has an anti-aliasing feature to make fonts look smoother called “Font Smoothing.” It reduces the jagged edges around texts, making them look smoother. Press the Windows key and type “Adjust the appearance and performance of Windows,” then press Enter. In the Visual Effects tab are some customizable features with checkboxes. Look for “Smooth edges of screen fonts” and uncheck the box. Then clicking Apply, and then OK.