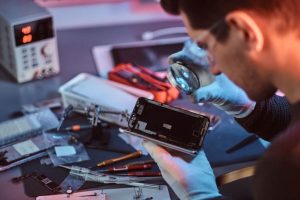 Have you ever wanted to buy a phone and you’re confused about the terms renewed or refurbished? Many people have a negative reaction when they hear the word “refurbished”. I’m guessing “renewed” is a marketing jargon attempting to avoid that reputation.

People have often wondered what a renewed phone is? And how they are different from refurbished phones? The answers will surprise you.

What is a Renewed Phone?

Renewed phones are those that have been returned by customers or retailers. They are, however, regenerated by repairing all of the flaws that they previously had. These phones are returned to the firms that work on the phone flaws, and then they are remarketed as renewed phones.

Renewed phones are the same as refurbished phones, and the terms can be used interchangeably. These phones are reconditioned items that have been examined and certified by a competent technician or a certified third party to perform and appear like new.

To be honest, the terms “renewed” and “refurbished” are used interchangeably, although they’re essentially the same thing. If you use two terms interchangeably, you won’t be far off the mark. The most significant distinction is in marketing. The term “renewed” is used by Amazon to describe a reconditioned product.

The other situation is when a gadget has been refurbished by a third-party vendor. Things become a little more complicated as a result of this, and in this instance, you have no way of knowing if the device is brand new or has been used. Also, you have no idea who repaired the device, the manufacturer, or the merchant.

On the other hand, a renewed device is usually a used device that has been bought by a retailer. The gadget may have issues. A device of this nature has been resurrected, and its appearance has been improved. Charger cables are also included with the gadget (they may be not original ones). It can also be packaged in the original box or a similar box (if the original box does not exist). Typically, such items are tested for adequate operation and they come with a warranty from the seller, but the manufacturer’s warranty does not apply.

So, what is a renewed phone? We can say when an old, used product is evaluated for issues and problematic parts are replaced with brand new ones, then it is renewed. Refurbished, on the other hand, means that the damaged pieces have been replaced or repaired so that it functions as if it were new. You don’t have to be fascinated with these distinctions and bother about what is a renewed phone, though. Most of the time, they have the same meaning.

Why do Companies have Renewed and Refurbished Products?

The market for refurbished products on marketplaces is continuously expanding. It’s a $10 billion market already, and it’s only projected to increase as consumers understand that refurbished cell phones, laptops, and televisions can be high-quality products, and at lower prices.

Refurbished products are sold by companies for a variety of reasons.

The first is that the more individuals who purchase refurbished items, the less scrap there will be in the world. The second issue is that many people are unable to afford the most up-to-date versions of anything. Besides, every other year, the Americans purchase something new, and some Americans, on the other hand, require refurbished items, therefore, most recyclers offer restored items for sale. Also, note that lots of people in Third-world countries can’t afford new things that are taken for granted in advanced countries and these companies can bridge the gap by selling these luxury items as refurbished.

You now understand the difference between renewed and refurbished phones. You’ve gained some insight into buying refurbished items and making informed judgments. However, to be safe, always conduct as much research as possible. Don’t be swayed by internet fads. It is entirely up to you to make your choice.