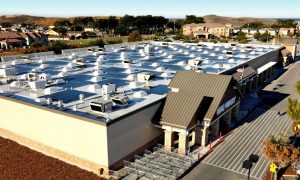 Walmart today has announced a way to appeal to the mass of eco-friendly California Liberals by installing solar panels on more than 75 percent of its stores in the state, making California the first state in the nation where Walmart has devoted this level of commitment to renewable energy.

For myself this news comes as no surprise, living in Northern California I hear a lot of non-sense about making companies forcefully be ‘green’ or ‘eco-friendly’. The idea that Walmart is going to appeal to those who normally shop in their stores here through the means of ‘eco-friendly energy sources’ is something I am surprised they didn’t do the first time they build a Walmart in this state.

“California presents a great opportunity for Walmart to make significant progress toward our sustainability goals by installing solar power on more than 130 store rooftops throughout the state,” said Kim Saylors-Laster, Walmart vice president of energy. “Walmart has reduced energy expenses by more than a million dollars through our solar program, allowing us to pass these savings on to our customers in the form of everyday low prices.”

When completed, Walmart’s solar commitment in California is expected to generate up to 70 million kilowatt hours of clean, renewable energy per year, which is equal to powering more than 5,400 homes. It will also avoid producing more than 21,700 metric tons of carbon dioxide emissions per year, which is equal to 4,100 cars off the road and provide 20 to 30 percent of each facility’s total electric needs.

The goal of course is to become a 100 percent renewable energy dependent company which will give them good face time in the light of most people finding Walmart to be a ‘mom and pop store killer’. I see no benefit in the movement other than to look good, since I doubt that in the planning process of building a Walmart there wasn’t an idea to add solar panels upon a massive Super-Walmart, but for most Californian’s hearing this news will probably think they made a big step in the fight towards ‘saving the environment’.

What do you guys think? Is this just an attempt to look good in a ‘Eco-Friendly’ state or is it a legitimate business plan?