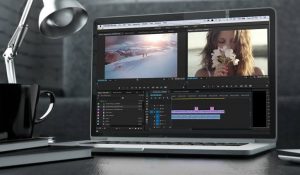 However much fun you experience when shooting a video, the real satisfaction arrives later when you bring it to your editing suite and turn hours of footage into something unique and memorable. You can create something acceptable with free software, like the Windows Movie Maker, but with the right tools such as the ones below you can make even an amateur video look professional. The best video editing software is quite a pricey purchase; therefore it’s best to compare products before making that commitment.

With a few exceptions like Apple’s iMovie and Windows Movie Maker, ultra cheap video editors are rarely genuine bargains. In most cases they aren’t even worth your download time due to their tendency to lag, meager features, and poor performance. However, many video editor packages in the double-digit price range combine software stability and ease of use with advanced features that rival what you would get in more experienced packages made for video editing pros. Here are some of the best video editing apps in the market today for laptops and desktops.

A veritable old man in the video editing industry, the Adobe Premier Elements has been in the market for around 18 years. Aside from its solid editing features provided by nearly two decades of improvements, one of the best selling points of this video editor is its tight integration with software packages, such as the Adobe After Effects.

Premier Elements feature a simpler interface, and is more stable and crash-proof compared to its competitors. Although the software doesn’t support 3D editing, its rich features give you everything you want or need to produce a slick, clean video clip. It also includes a Chroma key feature for layering or composting photos or video clips together.

The best addition to this software is the Premier audio options, which offers extra filters in cleaning up bad sound. The new Premier Elements 10 incorporates new tools for enhancing colors in the video and creating lively videos from still photos. Whether you own a Windows or Mac notebook, the Premier Elements is definitely worth your money.

Corel’s latest effort is an awesome demonstration of interface design in action. At first glance, the VideoStudio Pro X5 looks simple. I fact, all the options you need are sitting unobtrusively out of the way until you need them. The Pro X5 includes features that aren’t available in other software packages within the same price range, such as the HTML 5 authoring, a screen capture functionality, and Boris FX and Mercale filters.

For faster video-rendering times and improved responsiveness, Corel added the “advanced multiple core acceleration” option, which takes full advantage of multi-threading functionalities of multi-core processors. Many of the software’s effects are quite gimmicky, and there could be some disappointments, but there is little to whine about. It is an excellent video editing package, no matter how you intend to work.

Nero proves that overall feel matters, just as much as the software’s features in a crowded market. Although it has most of the usual bases covered, it feels a little clumsier. If you are an amateur at video editing and don’t want to go for an expensive software, the Nero 11 is a reasonable and cost-efficient alternative.

Just like most video-editing products, the Nero Video centers on a timeline that can be conveniently switched from easy to advanced mode, which offers access to audio tracks and individual videos. Nero’s advanced mode features include audio level changes, roll/slip tools for video trimming, and a tool for removing television commercials on captured clips.