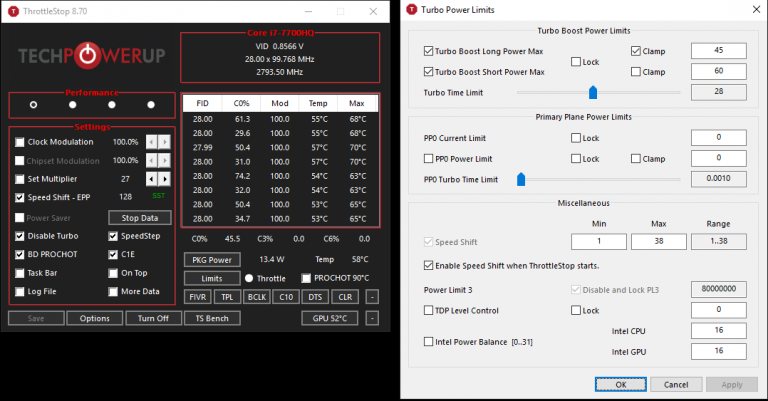 An original program by Kevin Glynn for combating Thermal, Power Limit, and VRM CPU throttling that you’ll find in most modern computers. Throttlestop was built to counteract throttling mechanisms used in older models of laptops to keep the temperature in check and change CPU clockspeeds.

Right now, Throttlestop is so powerful and feature-packed that you can use it to create temperature and clockspeed profiles, for benchmarking, SST tweaking, and temperature monitoring.

There could be damages caused to your computer when you use Throttlestop to overclock or overvolt your CPU and to disable the manufacturer’s throttling scheme. So it is recommended that you carefully monitor your computer power consumption with a kill-a-watt-meter on the power outlet to ensure that the machine isn’t drawing more power than the power adapter can manage.

Throttlestop CPU Not Supported is just another issue users experience when trying to use this performance and modification tool on their machine. In this article, we’d be sharing a few possible workarounds you can try if you are ever in a position to deal with this.

This is one of the first things we recommend when users send us complaints that they are getting the Throttlestop CPU Not Supported error message. One specific user was using an Intel Core i7 machine and was seeing this issue, so we know it cuts across the board. Check to be sure you’re using the latest version of Throttlestop. All too often, we have seen people start getting the CPU not supported error when their software is outdated.

Fix 2. You have unsupported CPU (AMD and others)

The last time I checked, Throttlestop only supports Intel core CPUs. So if you are getting the Throttlestop CPU Not Supported error message on a processor other than an Intel, then you’re probably not going to be able to use this performance enhancer for your machine. For AMD users and some others, these CPUs do not have the BD Prochot signal path that Throttlestop attempts to disable on Intel machines, hence why it doesn’t work.

Read also: How to Overclock CPU without Bios

While not a direct fix, it sure will help you avoid the CPU not supported error a good number of times. In some cases, the throttling on your machine is a result of using unsupported adapters, or adapters that flake out, and will generally send throttling signals to the BD PROCHOT signal path.

While Throttlestop disables that signal path, having a working power adapter, one that is supported by your PC has been found to generally fix speed and throttle issues on your machine. So if you’re getting throttles, it may be that your power adapter is no longer able to service the demands of your machine.

Read also: How to Overclock Laptop CPU and RAM on Windows 10

One of the complaints we got was from a user trying to use this tool on a Dell Inspiron 3551, and they started experiencing issues. In some cases, machines like Inspiron 3551 were underpowered years ago, and every day, newer software demand more power and resources from computers. In cases like this, something as simple as a computer upgrade will fix all your speed issues, at least for the foreseeable future.

Overall, we recommend that you only use Throttlestop as a last resort for improving your computer speeds. As you have seen, this isn’t a beginners’ tool, it’s mainly for advanced PC users, so we wouldn’t recommend you play around with it.

Read also: What does the MSI game boost do? Does it work? Is it Safe?

And one of the first questions I ask is, why? What are you looking to accomplish? If you want to save a lot of power, always make sure your C states are working correctly, making sure your cores are spending at least 99% of their time in the C7 states when your computer is idle.

It should also be noted that clock speed isn’t the only thing that determines power consumption. In fact, when you have a higher clock speed, tasks may be completed more rapidly and the processor spends more time in the lower C states where it will use less power. If you’re having issues with Throttlestop, we came across this long thread where the maker of the tool is pretty active, so you might want to drop in and drop any questions you have.