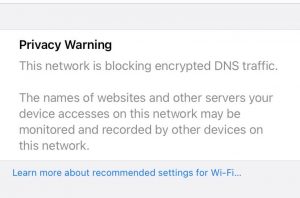 As it turns out, if the network fails to meet certain standards, this is normal. Also, if you’re connecting to a network that isn’t configured according to Apple’s recommended security standards, you’ll get a notice like this.

If you receive this warning, it’s more probable that you’re trying to connect to a network using a router that doesn’t support encrypted DNS. There are different solutions for this issue depending on your router and ISP, and we’ll also look at them in this article.

What does blocking DNS traffic mean?

Yes, it is. DNS plays an important role in supporting current online traffic, so it’s no surprise that it’s a popular target for cybercriminals. DNS blocking is one of several best practices that can have a significant influence on overall cybersecurity, and one of the most efficient techniques to keep people from visiting harmful websites or getting hijacked.

There are different reasons why you may get the “this network is blocking encrypted DNS traffic” warning. We’ll look at the most common ones so you know what to do the next time you get this notification.

If your iPhone displays a Privacy warning stating that the network is blocking encrypted DNS traffic, this means that your network is vulnerable and other devices on the same network may be able to trace your browsing activity. It may also be because of poor router configuration.

You can try these approaches to solve the problem.

Encrypted DNS will secure your privacy while also preventing hackers from obtaining your account information. When your network doesn’t support it, you’ll get a privacy notice on your screen saying that “this network is blocking encrypted DNS traffic”.

The only way to keep DNS traffic safe is to encrypt it and your iPhone will be able to block dangerous websites or prevent an attacker from hijacking your account on your mobile network.