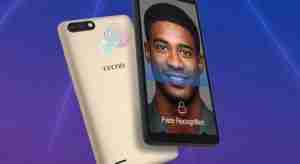 Released in April 2019, Tecno POP 2F from Tecno popped in some upgrades in Tecno’s POP family as Tecno introduces a new identity to the POP lineup, ‘Unlock, Always A Step Ahead’. While the Tecno POP 2F has many other features to be treasured, its main selling point lies in the security technologies.

Tecno POP 2F introduces a Face recognition technology that lets you unlock your device via your face. Stay with us as we dish out more on the latest Tecno phone, Tecno POP 2F. Let’s start with the key features, specs, and price information, then, we’ll dive in a little bit deeper in the details.

How much is Tecno Pop 2f in Nigeria? The Tecno POP 2F Price in Nigeria is N26,000, and its now available at retailers like Slot, 3cHub, Pointek, Amazon, Jumia and Konga.

Since the POP 2 Pro, the POP family has not yet featured an upgrade in memory spec, even down to the new Tecno POP 2F. Like the POP 2 Pro upward, this Tecno POP device features 16GB of built-in memory and a 1GB RAM. While this memory status might not really fit into our modern definition of a flagship smartphone, it’s quite a fair offer at such a price range. What do you think?

Tecno POP 2F inherits from its recent predecessors an 8MP front camera with flash and a 5MP rear camera with flash. Tecno promises that the 8MP selfie camera featured on this device can take amazing and clear pictures even in low light scenarios with front flash. This time, Tecno mobility says in specificity that this device features with beauty camera which has 7 levels of beauty mode to give you a brand new photography experience.

Equipped with a 1.3GHz Quad-Core processor, the new Tecno POP 2F will definitely render a smart performance like its most recent predecessors; POP 2 Power, POP 2 Pro, and POP 2. This device is also run by HiOS 3.3 based on AndroidTM 8.1 (Go edition) coupled to give you a simplified, fluent, and efficient user experience.

Tecno POP 2F features the usual 5.5-inch Touchscreen display which pushes a resolution of 940-by-480 pixels. As for its dimensions, this device is 149.76mm tall, 72.8mm wide and 9.35mm thick. You can get the Tecno POP 2F in colours like Champagne Gold, Midnight Blue, and City Blue.

While the recent POP 2 Power sports a bigger and longer-lasting 4000mAh battery, the latest Tecno POP 2F sticks with a 2400mAh battery like the POP 2 Pro and POP 2. Thus, you can expect this device to last as longs as the standard Tecno POP 2 can.

In addition to the already addressed rear-mounted fingerprint sensor, this device also features a G-sensor for display rotation, for example, providing the sensation of movement to control games like Asphalt.

I just think the big deal about this new Tecno phone is the trendy Face recognition technology it features which is a notable upgrade in the line-up. On the other hand, extending the competition outside the walls of the Tecno POP family, the latest Tecno POP 2F, as the POP family has had a custom, is basically targeted at affordability. What about you? Do you think that this device is a fair offer for its price tag? Comments! Comments!! Comments!!! Put your thoughts down in writing.

More detailed latest smartphone reviews loading up, don’t go away for too long.