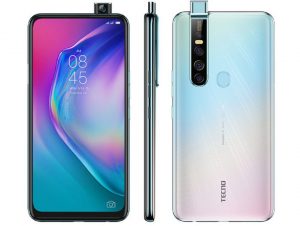 Tecno Mobile launched the Tecno Camon 15 Pro in Nigeria on April 3rd and there are just so many features that we can’t help but appreciate about the gadget.

The device has been heavily touted in the industry as one of the best to come from Tecno, with a pop-up camera and a camera produced by one of the very best companies in camera technology, Sony.

The Tecno Camon 15 Pro comes with two main colours, Ice Jadeite, and Opal white, while we expect that the smartphone comes in a couple of other colours as the days go by. The device comes with a free wireless speaker, and it’s the very first device from Tecno Mobile to sport a 32MP AI pop-up Camera.

Companies like Xiaomi, Huawei, Realme, Honor, Vivo, and Oppo have released variants of their smartphones with pop-up AI cameras, but something I have personally noticed with most of these is that the technology is pretty new, and the pop-up camera is not a great as the selfie cameras we used to have on older phones. The Tecno Camon 15 Pro plans to change all that with a pretty clear, and amazing pop-up camera.

Let’s take a look at some other features of the Tecno Camon 15 Pro, and let’s see where Tecno did great, and where they should improve.

Read my Tecno Camon 15 Air review and price in Nigeria

If what you are looking for in a smartphone is beauty, you can trust the amazing design that comes with the Tecno Camon 15 Pro. The device sports polycarbonate plastic glossy finish at the rear panel, with a lining pattern that makes the device attractive.

I’ll think I am right if I conclude that this is the best, most distinct-looking smartphone from Tecno mobile. But that can be put up for debate anytime. The front of the device comes with a completely bezel-less display, it also sports a slight chin at the bottom.

The curved edges of the device allows the smartphone to easily fit in your palms, but like most phones with this new pop-up camera, the device looks and feels bulky. This is largely because the pop-up camera at the top doesn’t allow for a slimmer device.

The rear is made of glass, and that means you’ll see a lot of fingerprints and smudges. Interestingly, the device comes with a protective case to protect the glass back.

The Tecno Camon 15 Pro comes with a 6.53-inch dull HD+ display. The screen also sports a resolution of 2340 X 1080 pixels and a screen-to-body ratio of 91.2 percent. The device comes with a pop-up selfie camera, so it doesn’t have space for a notch. The device sports amazing viewing angles and amazing outdoor visibility of 480nits brightness which makes the texts easily readable in daylight conditions.

The device also sports a 256GB max Memory expansion option using a MicroSD card. This device doesn’t come with a lot of power when it comes to performance. We didn’t notice any lags whatsoever while testing the device. The device multitasked pretty well and apps opened quickly.

Gaming on its own is an important thing for me personally. While testing this device, I tried to play casual games on it and it worked fine, but when I started to play high-graphic games like PUBG Mobile, the device didn’t do great; in fact, it wasn’t able to handle the high-graphic settings of the game.

The Tecno Camon 15 Pro’s security is a pretty standout feature of the device. It sports fingerprint sensor and face unlock. These two features work pretty fast, so that’s a plus for the Camon 15 Pro.

I noticed, though, that the device comes with a lot of bloatware.

The HiOS comes with support for a three-finger swipe when taking a screenshot. It also features Phone Master which allows you to delete Junk Files fast and clear the RAM.

As we mentioned earlier, this device stands out and its camera is one to respect. The pop-up selfie camera on the Camon 15 Pro comes as the first for Tecno in Nigeria. The device also sports light on the camera mechanism, which comes on when the camera pops up. The pop-up AI selfie camera is 32MP. The front camera allows for modes like beauty, AI shot, super night, and wide selfie.

From my testing, I noticed that the device can take good shots, with attention to details. The device also sports amazing colour depth, and the colors are neither oversaturated nor overexposed. I also loved the macro shots, since the detailing was on point. Amazingly fast focus and great colour reproduction. So for this price, the Tecno Camon 15 Pro camera is on point.

The Tecno Camon 15 Pro sports a 4000mAh battery, and it comes with a 10W charger. Under normal pressure, I used the device for over a day. I streamed music, watched videos online, made and received calls, used the internet nonstop, checked emails and played high-intensity games.

The Tecno Camon 15 Pro has an amazing charging speed. I was able to get a full-charge in almost 2 hours, but the only thing I noticed with the charger is that it still comes with Micro USB when most new phones now come with a better option, the Type-C Port.

So what’s my verdict?

The Camon 15 Pro is one of the best devices from Tecno Mobile. The finishing gives it a premium look and feel. The display is also immersive. I still noticed a lot of bloatware on the device, but you can take comfort in the amazing camera.

The Infinix Hot 9 also just hit the market. So this device can expect to see competition. Let us know which of these two devices you’ll settle for. The Infinix Hot 9 or the Tecno Camon 15 Pro?