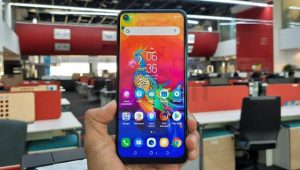 With the new Tecno Camon 12 Air, Tecno flaunts its version of a revolutionary display. The new Tecno phone is the first in the series to sport a Dot-in display design. In fact, from a front view, Camon 12 Air looks nothing like its predecessor.

Here an article I wrote on the latest Camon 15 Premier.

We’ll see more on the display as well as other feature aspects of the latest Tecno phone, Tecno Camon 12 Air, as this article proceeds. In the details list immediately below the rundown is contained the price information too of this device.

Having learned a great deal about the new Tecno phone, Tecno Camon 12 Air, what do you think? Is Camon 12 Air the phone for you? A mid-range smartphone featuring up to four modern and essential cameras, a long-lasting battery, and most importantly, a large bezel-less and truly expansive dot-in display. Level that up with its price and tell us your verdict in your comments below.

Tecno places the Camon 12 Air way ahead of its siblings when it comes to display specs. In fact, Tecno refers to Tecno Camon 12 Air as the “unprecedented one”. The latest Tecno phone is the only one amongst its Camon 12-series to be equipped with a new revolutionary dot-in display by Tecno mobility.

The dot-in display of the new Tecno phone is essentially one almost completely free of bezels with an in-display notch punched at the top left of the screen. This means that for one, you get a less disturbed view even better than the popular waterdrop display featured on most recent smartphones.

More so, the dot-in display featured on this device is as large as 6.55-inch with a 90% screen ratio giving you not just an amazing expansive viewing experience but a whole new way to enjoy your smartphone content in a fuller measure.

Though Tecno Camon 12 Air delivers the least camera performance in the Camon 12-series, it scores pretty well among other options within its price range when it comes to camera specs. The new Camon 12 Air is equipped with a camera system of four cameras in total like its siblings – one in front, three at the rear.

Earlier we talked about Camon 12 Air’s punched-hole display. In that in-display notch of this device is contained an 8MP AI beauty selfie camera. With this new selfie camera, Tecno brings back to its dedicated Camon series smartphone users the traditional remarkably clear photography experience in selfies.

Camon 12 Air’s selfie camera is equipped with an enhanced mosaic algorithm meaning you can capture much clearer and brighter selfie shots.

Read also: My look at the Tecno Camon 15 Air and price in Nigeria.

This device also brings back funny interaction with AR stickers. Camon 12 Air’s AR stickers let you add fun to your shots with over 220 facial features supporting identification across 120-degrees. And if you are a Manchester City football club fan, good for you, because this device features a special AR customized version for the club for you to explore when taking your selfies.

At the rear of this device is installed an AI Max triple camera setup consisting of a 16MP main camera, 2MP, and 5MP secondary cameras. The 16MP high-resolution camera of this device is designed to let you capture impressively rear shots within normal scenarios.

The secondary cameras, on the other hand, offer you three different and mostly desired camera performances wide-angle shots, 2cm macro photography, and bokeh effects. Camon 12 Air lets you capture super-wide-angle shots and get virtually everything on-site into your shot up to 120-degrees range of view.

Macro photography experience and portraits with this device are remarkable especially as bokeh effects highlight the main image subject while blurring background sundry.

The Gradient design of the Camon 12 Air is another feature that distinctly distinguishes it from the rest of the 12-Series. Inspired by the Aurora (related to Dawn), Tecno adorned this device with a special beautiful dawn-like gradient rear cover design with a macroscopic carving texture. Apart from Aurora, Tecno Camon 12 Air is available in two other aesthetic colour gradient designs namely Ocean Blue and Alpenglow Gold.

The new Tecno phone packs a large 4000mAh battery like the standard Camon 12 making it a better candidate than its sibling, the Camon 12 Pro which comes with a 3500mAh battery, when it comes to battery life. So if battery life is the deal for you, you can expect the new Tecno Camon 12 Air to last a great deal like some premium latest smartphones out there letting you stay connected and explore your device for a longer period of time.

Among the Camon 12-series, Tecno Camon 12 Air has the lowest memory status. Tecno Camon 12 Air pairs a 32 GB ROM to a 3 GB. Though not quite impressive, the memory of this device lets you store an ample amount of your favourite videos, pictures, apps, etc.

And with the RAM all leveled up with the inbuilt memory, you can expect a fluent and smooth experience. While your phone is exploding with inbox or your music is playing continuously, or play games, or all at the same time this device keeps everything flowing smoothly.

In fact, Tecno relays that this device like a few other recent Tecno phones has achieved an increased app startup speed by 50% and game fluency promotion by 25%.

The new Tecno phone is powered by a 2.0 GHz Quad-Core processor. However, just like most recent Tecno phones, Camon 12 Air’s HiOS UI is run based on the latest Android 9 Pie. So, essentially, you can expect a performance as good as most current Tecno phones in the market.

Like the standard Camon 12-series smartphone, Camon 12 Air features a rear-mounted fingerprint sensor which serves for personalized smartphone security via fingerprint information. Similarly, this device sports other essential and modern sensors featured by most recent Tecno smartphones. They include a G-sensor, an ambient light sensor, a proximity sensor, and an electronic compass.