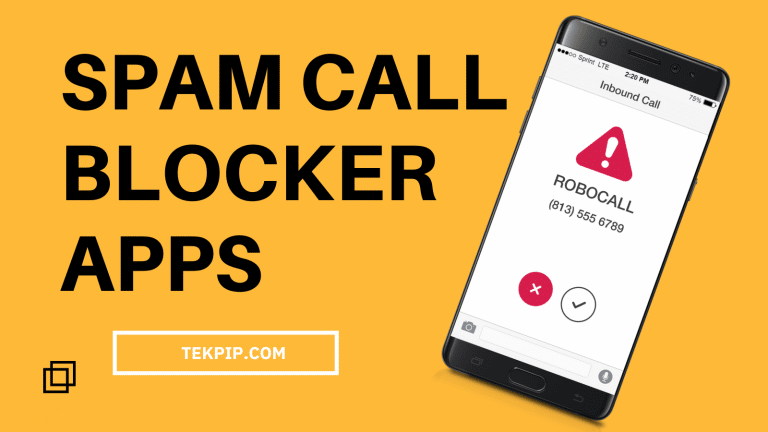 In recent years mobile users have been under a siege of spam calls from Robo-callers, unwanted callers, and even internet fraudsters. According to our article on spamming phone numbers with texts and calls, your first contact with a service provider often gives out your details for KYC requirements. But it usually doesn’t end there.

Between automatic responders, unauthorized call centers, and scam attempts, many mobile phone users now receive more unwanted calls than calls from legitimate contacts. A survey in the US found that Americans receive an average of 3.7 scam calls and 1.5 scam texts per day.

Consequently, over $29 billion is lost to phone scams in one year, according to CNBC. In this article, I’ll introduce you to the best spam call blocker apps for Android and iPhone devices. Most are available for free, but there are also apps with more protection that are paid for.

Below I’ll do a roundup of the 10 best free and paid spam call blocker apps for iPhones and android phones. You can download them on the Google Play Store or App store. In the first two entries, I’ll explain how to use these tools to block spam callers.

I’m starting with one of the lightest and easiest-to-use spam call blocker apps, Phone, developed by Google LLC.

I know many Android phones natively integrate the blocking of unwanted calls. But this does not always prove to be effective. A proactive solution is needed, possibly one that any user can use.

Fortunately, Phone by Google has been available for download for all Android smartphones for some time. The app has been downloaded over one billion times on the Play Store and maintains an average rating of 4.6 out of 5.

There is also the caller ID and spam function among the various features it includes. Users can see information about the people or companies calling when this feature is enabled. And, of course, they can receive alerts about potential spam numbers. For example, if the number is classified as probable spam, the smartphone screen with the incoming call will turn red.

To activate the Caller ID and Spam feature, you need to:

Truecaller is considered by many to be the best free spam call blocker app for iPhones and Android phones. With over 250 million users worldwide and 1 billion downloads on the Play Store alone, Truecaller is one of the best online apps and a feature-packed Swiss army knife against spam nuisances and unwanted callers.

Once installed from the Play Store, you must validate your phone number. You can also replace the SMS app with that of the app to avoid receiving unwanted messages.

Truecaller is very efficient in recognizing and blocking unwanted calls on Android, thanks to its huge database. In addition, call center spam numbers are continuously updated thanks to reports from users, who can add data regarding the nature of the call and thus help the entire community.

When you receive a call, Truecaller will check and report if the calling number is suspected spam. It also specifies the type of service offered (forex, banking, loan, telephony, gas/energy, etc.).

The app contains many premium features that can permanently, or almost completely, rid your Phone of serial nuisances. However, even the free features make a is effective in sanitizing calls from serial spammers.

From the app settings, you can block well-known spammers, private numbers, numbers of foreign countries, and numbers not in the address book. In addition, you can choose whether or not to receive notifications of blocked calls and messages.

How to block top spammers on Truecaller

How to block unwanted calls on Truecaller

Nothing could be simpler:

A pop-up menu will open, asking you to specify the type of spam: sale, scam, survey, company or person, and more.

Read also: Why am I getting spam text messages on my iPhone and Android phone?

Another very popular app for blocking unwanted phone calls is Hiya. Its roots go back as far as 1997, with the advent of the White Pages. While Hiya is less well known than the two apps reviewed so far – 10 million downloads on the Play Store versus 1 billion on TrueCaller – it offers many useful features for free.

Its main purpose is to identify and block spam calls, thanks to its database that identifies over 400 million calls each month. Protection is also extended to SMS. On the one hand, unwanted messages are not even shown. On the other hand, even SMS from reliable numbers are scanned for malware and viruses.

Hiya doesn’t require your phone number to work, although it’s highly recommended that you enter it. With the Basic plan, which is completely free and ad-free, the app identifies unwanted calls and companies but doesn’t automatically block them. But, of course, you always have the option to block someone manually by putting them on your block list.

The app is still very useful for identifying potential spammers and nuisances, even if it is less popular than TrueCaller. Its main advantage is that it is ad-free, so it’s worth checking out. Hiya is available for free and in a premium version that costs $2.99/month.

Should I Answer is another free application that does not require registration or provision of your data. This service works quite well and blocks all calls from numbers deemed spammy by the community.

The app is available for free for Android and also for iPhone. After installing and starting Should I Answer on your device, you must grant the permissions required to function well. Then you can scroll through the information tabs on its home screen to see the application’s main features.

Suppose you want to activate the preventive blocking function of unwanted calls. In that case, you can activate this by tapping the three dashes at the top right, then going to Settings > Blocking and moving the switch levers to ON. These are next to the calls you want to block (e.g., reported by you as spam, foreign number, etc.).

Mr. Number is also one of the best free and paid spam call blocker apps for iPhones and Android phones. Hiya developed the app, which was released on July 5, 2020, for free, and already has over 200,000 downloads.

Mr. Number helps to identify and block spam calls, scam calls, telemarketing calls, unwanted calls, robocalls, and unknown numbers. In addition, the app instantly blocks anything that may be suspicious.

The number database has over 14,000,000 unique phone numbers. Like Truecaller, the members of the app community add new spam callers to help other users protect themselves from dangerous calls. You can also choose from the settings to automatically block all incoming spam calls without hearing the phone ring or beep.

Another interesting aspect is that you can block text messages by adding keywords. Mr. Number works without problems, even in phones with dual-sims. There is also a personalized blacklist based on spam calls already received.

Read also: 5 Apps and Services That Help Spam a Phone Number with Calls

With Call Control – Call Blocker, you have multiple options for spam call management. Its primary function is to block messages and calls from a third party. The application also has a database enriched with data created by members. This includes several hundred telephone numbers of spammers already reported by other users.

Call Control – Call Blocker allows creating a White List and a Black List. When contacts belonging to this list try to reach the user, the automatic voicemail activates. It responds by making the caller think the Phone was switched off or in a place without network coverage.

The user can also automatically set the Phone to pick and hang up calls immediately. This is an effective way to make someone understand that calls are not welcome. Call Control – Call Blocker is offered in a free version but is limited to 15 days. The auto-renewable subscription is available for $9.99 for the quarter of a year.

If you’re looking for a simple app to block phone numbers, this one takes the cake, and, like the previous ones, it has a pretty nice overall design. The first section you will see is the list of blocked calls. Then, if you slide to the right, you will see the blocked SMS. And further to the right, you have the numbers on your black and white list.

The settings section is quite brief. In Values, you will see all the settings you want to configure. Unfortunately, there is a lot of advertising below the sections. But they are ads and not pop-ups, at least. By the way, they are only found in Settings, so you will not see any ads outside of there.

This app is visually pleasing and makes it easy for you to block those pests. When you receive a call you don’t want, all you have to do is go to the application, tap the “+” button and choose whether you wish to block the number of a contact, of someone who has called you, or enter the number by hand.

As soon as you run the app, you will see the Blacklist of the numbers you have blocked. Meanwhile, if you tap on Record, you will know when those numbers have called you. Every time a blocked number calls you, you appear as busy to the other, and you receive an SMS notifying you that they have called you.

You can also configure a white list for those numbers you don’t want to block in the settings section. Users can also go to the calls section to block private and unknown numbers. You can do the same with messages when you go to SMS.

This application is available on the App Store, protects you from unwanted messages, and blocks calls from unknown numbers. The Nomorobo app is free, but like many blocking apps, it comes with in-app purchases.

With Nomorobo, you’ll be able to block annoying numbers while allowing access to people you want to stay in touch with. In addition to this, the application does not use advertising on its interface. So you can use it in peace without being bothered.

Whoscall – ID&Call Blocker is also an innovative application that allows you to block all unwanted calls on your smartphone. It works by identifying unknown calls and blocks spam and robocalls.

In addition, the application allows you to personalize your caller ID, so your recipients know who you are when you call them for professional purposes.

Read also: What Is Robo Revenge?