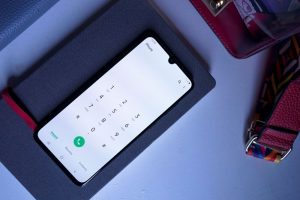 In this article, we will outline the Samsung A70 Price in Nigeria and a complete review.

So far, we are some scrolls away from the details of the Galaxy A70. But I figured you might use some heads-up. The Samsung Galaxy A70 is celebrated for features like an Infinity U-Display, on-screen fingerprint, super-fast charging, and a great CPU speed. That’s not all, there’s more.

Screen time on the A-series lineup has gotten even better with the new Samsung Galaxy A70. This Samsung A70 sports an FHD+ AMOLED Infinity-U display screen as large as 6.7-inch with a 1080 × 2400 resolution.

This display has an expansive 20:9 ratio and a colour depth of 16M, making your viewing experience immersive and your mobile entertainment as captivating as they can be. There is no way you are not going to treasure every second you spend playing your favourite games and videos on the display of the Galaxy A70.

With the revolutionary on-screen biometric authentication featured on the Galaxy A70, unlocking your device can be as facile as just placing your finger on the screen just like you do every other time you’re navigating on your phone’s interface but just that this time, it only recognizes your personal fingerprint.

And speaking of personalized protection, the Galaxy A70 does it like some in the A-series line-up featuring face recognition technology which only grants access to mobile data to the face that owns it. All you just need to do is hold your device to your face and it will unlock instantly.

The Samsung Galaxy A70 is powered by a massive non-removable 4,500mAh battery. Equipped with such battery capacity, this device can stay powered for up to 28 hours on 3G WCDMA talk time. While you are worried that your device battery life will be exhausted in no time due to nonstop internet usage, the Galaxy A70 powers for up to 14 hours on 3G internet usage, up to 16 hours nonstop on both 4G LTE and Wi-Fi.

This device lets you keep entertaining yourself for up to 24 hours nonstop on video playback and up to 128 hours on audio playback. This device is not just equipped with a 4,500mAh battery, it features an efficient 25 W super-fast charging which gets your device fully powered back up in practically no time, allowing you do more and charge less.

With Galaxy A70, Samsung gives you the smartest and fastest operation there is so far in an Android device featuring the Android 9 Pie. Samsung Galaxy A70 is powered by an Octa-core 2 GHz, 1.7GHz processor. Featuring a One UI, the usability of this device gets even better.

While the OS, processor and the One UI make the Galaxy A70 very smart, fast, and powerful in operation, the Bixby feature takes its performance and operation to a whole new level. Samsung added more functionality to its Bixby in the new Galaxy A70.

The Samsung Galaxy A70 Bixby also features the new Bixby Home which learns your habits and curates useful apps and contents based on your usage patterns. And then, you get the Bixby Vision. This one is an inbuilt feature on the Galaxy A70 camera app designed to allow you to search for items and translate documents with ease to make life more efficient for you. For example, with the Bixby vision, just by taking a photo of an item, it might be sunglasses, wristwatches, etc. you can see how they look on you before actually buying them.

The phone comes with an on-screen fingerprint instead of a fingerprint sensor at the rear, hence, it has a minimal look, allowing you to freely move your fingers around the rear of your device. The Galaxy A70 is designed outwardly to give a modern impression and feel of a smartphone. It also comes in colours black, white, blue, and coral from which you can choose to suit your personality.

Galaxy A70 houses a triple rear camera setup, a front-facing camera, and some beauty packages.

The triple rear camera setup of the Galaxy A70 includes a 32MP main camera with an F1.7 aperture which ensures that you capture those memorable moments in their brightest and clearest form, an 8MP Ultra-wide camera with a 123-degree field of view like the human eye to capture a whole lot in just a single shot, and then, a 5MP depth camera with an aperture of F2.2 which lets you adjust the depth of field before and after shots.

At the front of the Galaxy A70, you will find a 32MP selfie camera with an F2.0 aperture which puts you in the spotlight both in daylight and low light. You can also adjust the background depth and blur the background of your selfies on the Galaxy A70 using selfie focus.

The Galaxy A70 had to come with those beauty packages we love and enjoy in the line-up such as the Scene Optimizer which recognizes and enhances the subject in photos using artificial intelligence, the flaw detection which helps you take the right shot at the right moment, and AR emojis, stickers, and stamps personalize our photos and to play with.

You get a huge 128GB inbuilt or internal storage to play with and a RAM of 6GB with the new Galaxy A70. That should be enough to store a large volume of videos, apps, pictures, documents and more. But in a case whereby this inbuilt memory doesn’t do it for you, this device also supports external memory storage using a microSD card of up to 512GB.

Samsung equipped the Galaxy A70 with a SIM 1 + SIM 2 + microSD slot to support dual-Nano-SIM connectivity. This device can also handle 2G GSM, 3G WCDMA, 4G LTE FDD, and 4G LTE TDD. And still, on internet connectivity, this phone allows for direct Wi-Fi connection and comes with an 802.11 a/b/g/n/ac 2.4 G+5 GHz, VHT80 Wi-Fi connectivity capacity. The location technologies featured on the Galaxy A70 are GPS, Glonass, Beidou, and Galileo.

Samsung A70 price in India Amazon

The Samsung A70 price in India Amazon is Rs. 22,190. You can also order on other online marketplaces, but Amazon seems to be the fastest as they offer same-day deliveries on certain orders.

Those sensors we have been enjoying in the A-series lineup so far which add to the connectivity and smartness of these devices also feature on the Samsung Galaxy A70. This device comes with an Accelerometer, a fingerprint sensor, a gyro sensor, a geomagnetic sensor, a Hall sensor, an RGB light sensor, and a proximity sensor. In short, this new Samsung phone is very sensitive.

Samsung A70 Price in Nigeria

Thanks for staying with us right to the bottom of this review of the Samsung Galaxy A70. We hope you enjoyed the ride. And speaking of what you think about our review, there’s only one way to find out, and that is in your comments. Let us know what you think about the phone in question, your personal experiences, questions, and queries. We’ll be where you’ve always found us. Drop by from time to time to get more and more reviews of the latest smartphones as they come like the one you just read.