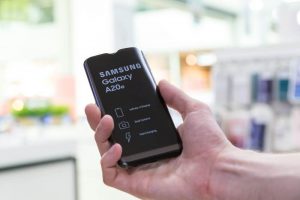 Looking for the Samsung A20 Price in Nigeria? We’ve experienced an overwhelming number of smartphones in the A-series lineup from Samsung. And now the Samsung Galaxy A20.

It is clear, however, that with this strategy of ceaselessly flooding its mid-range smartphone series, the A-series, with more and more products, Samsung is heavily aiming at overshadowing its competitors—the likes of Realme and Redmi—in the smartphone budget market.

So what has this Samsung’s latest phone got up its sleeve? Of course, as an A-series phone, we would be expecting that this new Galaxy A20 features should at least feature a relatively better battery, memory, display, and camera. Yeah, it does. Going into the details, though, there’s more to say about this smartphone, the Galaxy A20. Let’s start by highlighting some noteworthy details. Shall we?

The battery of the Galaxy A20 is quite an impressive and notable upgrade. This device packs a huge 4,000mAh battery up from the 3,400mAh battery on its predecessor, the Samsung Galaxy A10. Featuring such a massive battery, this device can keep going for up to 13 hours nonstop on both 4G LTE and Wi-Fi internet usage and on 4G LTE talk time, it powers for up to 31 hours nonstop.

The Galaxy A20 also allows you power your phone back up in practically no time with 15W fast charging.

Just like the former Galaxy A10, with the new Galaxy A20, you get 32GB of built-in memory to store a whole lot, ranging from your memorable photos, favourite shows, movies, and apps without having to delete to make room. Optionally, you also get external storage support of up to 512GB using a microSD card to play with and store up to 100,000 photos, that is, if the inbuilt memory won’t do. (Samsung A20 Price in Nigeria is 51,500 Naira)

And while its predecessor packs 2GB of RAM, this phone gives you a better 3GB of RAM.

Another very effective selling point! To make your viewing experience even better in the A-series lineup, this device is equipped with an engrossing and brilliant edge-to-edge 6.4-inch Super AMOLED Infinity display which propels an HD+ 720 × 1560 resolution. This display has a colour depth of 16M which means better clarity, saturation, and resolution on your gorgeous screen.

The camera of the Samsung Galaxy A20 is revolutionary. In the front, you now get an 8MP selfie camera with an aperture of F2.0 to capture amazing and flattering selfie shots. At the rear, you get a dual-camera setup which consists of a 13MP main camera with an F1.9 aperture for clear and great pictures for any occasion, and then, the new 123-degree 5MP ultra-wide camera with an aperture of F2.2 like the human eye which lets you squeeze almost everything on site— your lovely friends, pet, and beautiful sites like mountains, beaches, etc. — in just a single shot.

Performance in the A-series lineup has just got better with the new Galaxy A20 sporting an improved Octa-core 1.8GHz, 1.6GHz as its processor. Plus the Android 9.0 Pie, giving you one of the best, smartest, and fastest operation ever experienced so far in an Android device. To make things better, the Android 9.0 Pie is paired with One UI to make your background operation very smooth and effective.

Featured on this device also is a USB 2.0 with a USB Type-C interface and a 3.5mm stereo ear jack. The new Galaxy A20 also has NFC for smart mobile payment and Samsung PC version of Smart Switch for PC synchronization.

Samsung A20 Price in Nigeria

This phone, like its predecessor, offers you two very effective personalized protection technologies – a rear-mounted fingerprint sensor and a face recognition technology. Both of these features will help to ensure that your data is safe and in safe hands which can only be yours.

Do you think this new one from Samsung did it for you? Or maybe you expected more? Tell us all about it in your comments. What about our review of the Samsung Galaxy A20? Love it? We’d love to hear from you.

And sure, you can always come back for more detailed features, specs, and price information of the latest smartphones such as this. See ya!