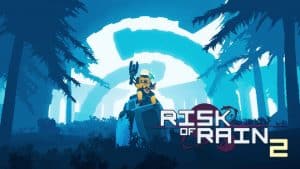 Risk of Rain 2 offers users a fantastic gaming experience as it manages to give off vibes of bullet hell. The Risk of Rain 2 is a 3D game, and it comes packed with gameplay and graphics that offer a phenomenal feeling. The game, the graphics, maps, and model are so beautiful, it’s like Borderlands mixed with Legend of Zelda Breath of the Wild.

Risk of Rain 2 is super responsive, it comes with up to four-player co-op gameplay. You also get a third-person shooting and rogue-like godhood that comes with distinctly flavorful items.

In Risk of Rain 2, you get to chase down unlocks across the continuity of multiple runs. The game is instantly gratifying seeing up to four persons crash on the planet’s surface, fighting your way through an unending array of ever-more-challenging enemies to earn as much loot as you can. I have found spectacles that increase your chance to crit and a syringe that helps increase attack speed.

The game also sports a couple of super rare items. One of such is the Brilliant Behemoth, which makes every attack explosive, providing transitive effects that can go from being just great to being amazingly powerful. You collect as many items as you like, and since many of these items are meant for attacks, you get different types of options when it comes to making a real impact with each enemy you face. The wide array of items also means you just don’t know what you’d be fortunate to come across and add to your skills inventory.

One of the downsides of the Risk of Rain 2 shift to a third-person perspective is that you now only see what’s in front of you. So you can easily get overwhelmed since the enemies attack you from different directions when you’re playing alone. This is in sharp contrast to what we find on the Risk of Rain 2 2D perspective; we found it pretty easy to track all of the on-screen action when playing alone.

So the main advice I give to players is to enjoy the game in co-op multiplayer. The added chaos that comes from four little space guys shooting at enemies all at once is mind-blowing. The game allows you to easily find parties in quickplay, and I have been able to advance from the first to second and even the third areas with strangers.

The game promotes quite a lot of teamwork. But it is only when more people realize that they accomplish more when they stick together will we see a lot more players going co-op. The game could also do more when it comes to communication. Since this is a game that requires quite a lot of communication in co-op multiplayer, improving and bringing more communication features will help players enjoy the game to the full.

The performance wasn’t perfect on the Risk of Rain 2, I noticed consistent hitches and frame rate chugs when I am in the middle of a chaotic shootout. The connection is OK, but once in every couple of matches, I have experienced slight connection issues. The art isn’t also as expressive as I would have loved. The lumpy and lo-fi levels lack character, and the enemies were also blurry, compared to their pixelated counterparts which are pretty detailed.

But overall, I think the Risk of Rain 2 is a game to love.

In this section of our article, we will be taking a look at the Risk of Rain 2 Characters, and getting to see how you can unlock each one of them easily.

The Risk of Rain 2 comes with eight characters that are playable from the launch of the game, these are:

Each of these characters, called survivors, has a unique method of unlocking. This article will serve as a Risk of Rain 2 cheat engine that will help you through all of the Risk of Rain 2 Character unlocks.

The Commando is the default Risk of Rain 2 character. So you’d be forced to play with him for some time before you can upgrade to another survivor. Among all of the survivors, the Commando sports the shortest cooldown time, and he sports a good set of skills, great for both first-time and advanced Risk of Rain 2 players.

It costs 10 Luna coins to free the Artificer from the Newt Shop. You get Lunar coins by picking them up after an enemy drops them randomly. The portal to the Newt shop automatically opens when you have cleared a stage, but if you want it to appear without clearing a stage, you’d need to spend one Lunar coin at the Newt alter. This brings up the blue portal anytime in the game.

Artificer is in a block of ice, a true blue wage, and he wields fire, ice, and lightning. The Artificer effectively manages cooldowns and combines elements. The basic attack of the Artificer is the fireball, which requires a charge system to work, which means you’d not be able to attack if you run out of charges.

When using Artificer, you’d be unable to dodge or teleport, so you’re only left with the ice wall to control crowds, but you still get the flamethrower which does a great deal of damage to your enemies.

Like MUL-T, Huntress is also pretty easy to unlock, but it requires some more skills. To unlock this character, you will need to clear stages one to three without dyeing. If you play the game in single-player mode, it should be fairly easy. If you choose the Risk of Rain 2 cheat of playing these stages in the least difficulty level, you might then co-op with other players.

To unlock Mercenary, you need to clear seven levels. After this, the Celestial Portal to Obelisk will be opened to you. Obelisk can be located at the end of the floating path, then you choose to “Obliterate” yourself when you get the prompt. You can take the celestial portal back to continue your gaming.

Risk of Rain 2 How to Unlock Rex

To unlock the Rex Risk of Rain 2, you be taking a different approach to things. Rex doesn’t naturally unlock as you play the game, so our simple Risk of Rain 2 cheat we’ve been using wouldn’t be working here. You’d need to:

Note: The battery pack will explode and kill you if you go below 50 percent in health, and you can use only this battery pack from your entire inventory of equipment items. So you should first get all the defensive and healing items you need. Playing the game using characters like the Huntress and Commando helps you get more defense bonuses.

You need to defeat the boss of the Siren’s Call stage to be able to unlock the Loader. This boss appears after a short ritual. You need to find and destroy enough of the small blue eggs that are dotted around Siren’s Call. The boss will then appear in the middle of the map.

Risk of Rain 2 Gesture of the Drowned

When you get this Lunar Item, you will be getting Reduced Equipment cooldown by 50 percent (+15% per stack). This item forces your Equipment to activate whenever it’s off cooldown.