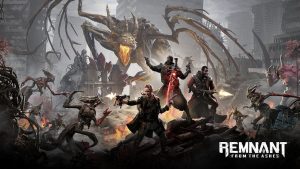 The main story behind Remnant: From the Ashes is a remnant of mankind; a world that has been thrown into a lot of chaos, and the culprit is an ancient evil that has a lot more power. An ancient evil that has never been seen or faced before.  You are one of the last remnants of humanity, and your job is to go out alone or alongside one or two other survivors and face the hordes of evils. So you’re technically in a survival action shooter game that’s set in a post-apocalyptic world that has been overrun by monstrous creatures.

When you play together with others, you’ll be having one or two other persons helping you, you’ll be able to discuss and apply strategies together, you’ll also be getting a lot more power when you attack together, with weapons and mods you all agree to use.

When you die in Remnant from the Ashes Nightmare or any other modes, you really won’t be losing anything. The enemies get to respawn upon your death; but apart from that, all that you have collected will remain yours.

Apart from Remnant From the Ashes Nightmare, there are two main types of bosses. There are the dungeon bosses, who play the role of mini-bosses while there are the main bosses who need to be defeated to make progress in the game.

Looking for gaming monitors for PS4 under $200? Here are the best.

When it comes to protection, Remnant: From the Ashes sports some cool armor sets. Remnant from the ashes armor sets are some of the best I have seen in-game. There is the Void armor, which, to me is the most sinister-looking armor in the game. It also happens to be the best armor you can wear in the game. Others are the Twisted, Radiant, Osseous, Scrapper, Elder, Slayer, and Akari armors. You need great armor to be able to defeat the countless bosses in the game. Your chances of killing the bosses in a fewer number of tries are also increased when you use an armor.

Now let’s take a look at some of the bosses in Remnant: from the ashes and see a few guides on how to kill them. These remnants from the ashes bosses have different strengths, so killing each comes with its unique techniques.

The Ravager remnant is a wolf boss that you get to face in a very huge area. He attracts faster than most of the Remnant from the ashes bosses, while he is also very dangerous. He has three nightmare mobs on his back that helps him by shooting at you –the player—in battle.

You might be able to avoid fighting The Ravager remnant, though. These instructions should help you find and avoid fighting and either killing the Ravager or having it kill you. If you choose to kill the ravager, then follow the steps that follow.

To find the Ravager Remnant,

To kill the Ravager, Always try to keep an average or quite far distance from the Ravager. If you are too close, you’ll suffer a lot more damage, so maintain the distance. Whenever the remnant from the ashes bosses draws close to you, he’ll either attempt to bite or claw attack you. Avoid these attacks by quickly dodging in any direction.

Don’t stop shooting him whatever happens. Look for even the smallest chances to get a bullet on him. He will likely disappear only to reappear with reinforcements on his back, you should use weapons that deal area damage, as that has been the best way to deal with this.

If you can’t use an area weapon yet, then concentrate first on killing the mobs, after which you face the boss again. The reason why it’s important to kill them first is that they’ll soon jump off the back of the Ravager boss and start moving freely around the arena while attacking you.

Here is how to kill Dreamer remnant from the ashes. When fighting Dreamer, always focus more on shooting his head. This is like a weak point, and you would be able to inflict more damage on him. After some time, you will have to face the Root reinforcements, so always keep a distance, aim for his head and always dodge its attacks fast. Whenever Dreamer tries a Volley, (where it stops in the air and shoots 3 projectiles, you just have to sprint to be able to avoid being hit.

He will only continue to fly towards you slowly to attack you, and we will be using this against him. When he is very close to you, dodge backward, and quickly shoot him in the head.

Whenever you notice that Dreamer is trying to pull you in, roll away and never approach him until he falls to the ground attacking you. Always attack the mobs that come as a reinforcement first, then concentrate your attack back on the boss.

Fighting and killing nightmare remnant from the ashes is hard. You need to be as detailed as possible and prepared if you ever want to get a chance, you could also co-op with another user, as that has been found to give a real boost for most players.

Nightmare is a huge bird-shaped boss. Nightmare isn’t as dangerous as dreamer though, but it is a lot more resilient with its attacks. Way more resilient that the remnant from the ashes nightmare we know in previous versions.

Looking for cheap gaming monitors for PS4? Here are the best.

Nightmare requires a pretty different strategy from what we have on Dreamer. In this case, you don’t want to start shooting him as soon as the battle starts. Focus more on killing as many enemies as possible in the Shadow Realm (the remnant from the ashes nightmare will transport you to the Shadow Realm from time to time, so be alert to this).

You’ll be able to inflict double damage when you kill as many opponents as possible in the realms. Every second counts when fighting remnant from the ashes nightmare, every second. The longer you wait, the more your health bar drops and the stronger the enemies get. Always try to kill as many as 8 opponents at least before you leave the dimension.

Nightmare attacks you with large energy orbs, but these are pretty easy to avoid. Just dodge to the side as fast as possible. Focus your attacks on his head. When his shield is up, your chances of hitting him and inflicting damage is reduced. You can also use fire and other weapons that deal a lot of damage over a long time. These weapons help to destroy his shield, giving you better chances of hitting him.

Immediately you think you have gotten enough kills in a dimension, run to another dimension.

Remnant from the Ashes Achievements

Fire in the Sky – Defeat Singe

The Bigger They Are… – Defeat the Ent

Wolf of the Woods – Defeat the Ravager

The Keymaster – Defeat the Claviger

Untouchable – Defeat a world boss in single-player without taking damage

Not So Special – Defeat 100 special enemies

First…But Not the Last! – Acquire the first trait

Halfway There – Upgrade any weapon to +10

Push It to the Limit – Upgrade any weapon to +20

Trait Dabbler – Upgrade any trait to 10

Trait Focus – Upgrade any trait to 20

Not So Lucky – Return coin to Ace

Are You Ok? – Meet the Root Mother

Like a Moth to a Flame – Meet the Swamp Queen

Changing of the Guard – Meet the Pan Rebel Leader

Survivor – Defeat 5 Bosses in a row in Survival Mode

Dominator – Defeat 10 Bosses in a row in Survival Mode