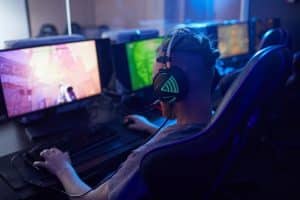 I’d be sharing as much information as I can about these two specs, and help you decide on which gaming monitor you should give a shot.

So if you are playing a game, let’s say at 60fps (frames per second) as we find on virtually all gaming consoles and video games, you will need a gaming monitor that will be able to refresh that many times. So for most 60 fps games, gaming monitors with 60Hz and above are the ideal options. If your game is sending information at around 75 or 120 fps, using a gaming monitor that refreshes at a slower pace will most definitely cause your games to lag.

The higher the Hertz of your game, the sharper the moving images in-game will be. This is because most blurs are caused by moving images that are slower than the pace the human brain processes the individual frames. That’s why it’s been believed largely that the higher the refresh rate of a gaming monitor, the lesser the toll it will have on the eyes, and the lower the chances of getting fatigued.

Looking for a good 4K monitor for console gaming? See our best.

Does Refresh Rate Matter For Gaming?

Yes, the higher the refresh rate, the better. When the refresh rate is either at the same fps or at a level that’s higher than the fps from the gaming pc or console, you’re bound to see a remarkable difference in the overall quality of your gameplay.

What Is A Good Refresh Rate For Gaming?

Is a 60Hz Refresh Rate Good For Gaming?

For most casual console gamers, the 60Hz refresh rate is OK. But for professional Esports athletes or anyone who plans to go into competitive gaming, 60Hz is absolutely a bad idea.

75Hz refresh is a good option for most console gamers and casual PC gamers. If you want to pursue a career in Esports and competitive gaming, though, you might find that a 75Hz refresh rate gaming monitor might be limiting down the line.

Screen tearing is caused by the incompatibility of the frame rates (fps) and the refresh rate (Hz). So when your gaming PC’s video card is sending out more frames per second than the monitor can refresh per second, the monitor is unable to handle the new workload, so half-frames will be shown together on the screen, and these will show up as a split between two portions of the screen, with neither of these frames lining up correctly.
Read also: what is ghosting on a monitor and how can you test and fix it?

What Is Response Time In Gaming Monitors?

Yes, monitor response time is very important for gaming. For most competitive gamers, every millisecond counts, and the difference between winning a match and losing it could be the response time. But if the only enemy you’re playing against is your computer, response time shouldn’t be an issue.

Refresh Rate Vs. Response Time Which Is More Important?

Honestly, both are very important when it comes to gaming. But if I was to sacrifice one of these two for my console gaming, I think I’ll go for 60Hz or 75Hz while shooting for 10ms response time and below. But if I was into PC gaming or professional gaming, I’ll fight to have a minimum of 140Hz refresh rate with between 5 and 1ms response time.

What is a good refresh rate on a 4K TV? Here is what you should look for.