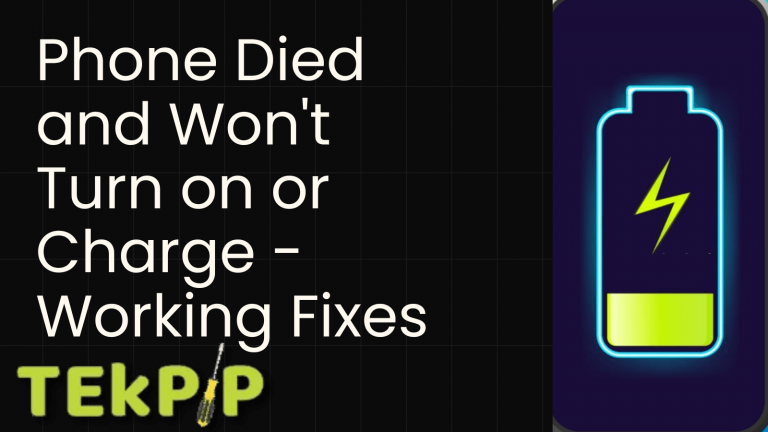 “My phone died and won’t turn on or charge.” This is a common query from Samsung and iPhone users. But who has not been in this situation before? In a nutshell, the common reason mobile phones die is when the batteries are drained out.

You were on a mobile game or movie session and weren’t watching the battery level. The battery slips below 1% and automatically switches off. Ordinarily, your phone is supposed to start charging as soon as you plug in a charger and turn it on after a couple of seconds or minutes. But one of the reasons it won’t charge or turn on is perhaps because you plugged in a bad charger after the battery was already dead. As a result, the battery keeps depleting instead of charging. Then it reaches a point where more than the remaining juice is needed to turn on the device.

It’s even worse if you own a phone with a built-in battery. But in this article, as always, we’ll discuss why you’re in this situation and how you can get your phone charged and turned on again.

Before showing you how to fix the problem, first, here are reasons why your phone died and won’t turn on or charge:

Three times, my phone died and won’t turn on or charge during my uni days. And the reason in all cases was because of a bad charger and continued use after the battery was low. Note that a phone that’s been dead for days, weeks, or months may also not turn on or charge. When your battery goes below the level it can charge itself; no charger can revive it unless you boost the battery directly.

Most electronic appliances that don’t have a mechanical way of starting use a battery system to start. That’s why when your portable generator battery is dead, you must start it manually with the recoil starter. Likewise, if your car battery’s dead, you have to get a few people to push it to start. But a smartphone doesn’t have an alternative mechanism for starting up without a battery.

You only have to find a way to “jump-start” your battery. In my case, I did this at a repair shop. But I’ll show you some tricks to help your battery receive some needed juice to charge or start.

If your phone battery dies and won’t charge or start even with a charger plugged in, maybe it’s high time you changed the charger. When some chargers are burned out, or the cables are damaged, they may not be able to pull up enough voltage into the battery. So, in this case, the battery ends up uncharged or discharged. If the phone shows no sign of charging, it may not turn on. And even if the bad charger seems to be charging the phone, when it turns on, the phone will soon turn back off. And sometimes, the battery won’t add more juice.

If you’ve dropped your phone on a hard floor or in water and it won’t turn on, you must take it to the repairer. It probably has a hardware issue. Or perhaps you can’t see it’s charging or turned on because it has a broken screen. The screen may have also disconnected from the connector on the main board after it dropped.

Is your battery leaking, or has it swollen? Has it been overheating? Have you ever noticed the battery level dropping from 90% to 10% within minutes? If your phone no longer turns on or charges, the problem could also be the battery. A battery problem usually happens gradually but can also occur suddenly, especially if your battery is swollen or leaking. Check the back of your phone. Does it look swollen or a bit heavier?

If there’s a way to open the back of your smartphone, inspect the battery from every angle to check if it is in good condition.

Phone Died and won’t Turn on or Charge? Here Are Some Tips to Fix

Fixing the problem should be easier now since we know why your phone died and won’t turn on or charge. But I’ll provide more details on how to fix whatever the problem is here.

Of course, the first thing to do once your phone switches off automatically due to a drained battery is to charge the phone. So, find a charger or cable, plug in the device, and charge the phone. Suppose the battery drained out (perhaps your kid had it turned back on after it switched off initially). In that case, it might take a few minutes of charging before your phone is ready to turn on. So, leave the phone plugged in for 10 to 30 minutes to see if it’ll charge. If the problem is still unsolved, try the second tip.

Force restarting the phone could also bring it back to life, as it may be stuck. To do this, press the power button for at least 10 seconds. You should see a startup logo appearing on your screen. If not, it may be a hardware failure.

Read also: How to Fix My Samsung A70 and A71 Not Charging

If the phone still doesn’t charge, you may need to change the charging adapter or the USB cable. This time, ensure you get the right power rating, fast charger, or cable. For Android users with phones that charge with USB C (especially Samsung Galaxy users), I recommend this 3A fast charging cable from SMALLelectric, while for even faster charging, try this Type C to Type C Superfast charger and cord. However, for iPhone or USB A device users, this MFi-certified charging cable is bestselling online. In case you’re not sure, here is why your iPhone charger cable is not working.

4.      Remove and dry the battery and charging port if it’s wet

If your phone falls into water, it may not charge if the water penetrates the circuits. You have to note that some phone features won’t allow your phone to charge. One of these includes the Moisture notification on some Samsung series. If your phone detects moisture in the charging port, it won’t charge.

First, you have to ensure the phone is turned off. Then remove the battery if possible and clean the visible water droplets on the phone and in the ports. Finally, try pushing the phone with or without the battery into a container of dry rice. Dry rice can absorb moisture. Leave it in the rice for 48 hours or at least overnight. Suppose you are getting moisture-detected issues even after cleaning and drying the ports, we have an article on how to disable moisture detected that you’ll find helpful.

If the battery is flat dead and can’t charge or help turn the phone on, before going ahead to charge the battery, try to revive it. If it’s a removable battery, you’re in luck!

How to revive a dead battery

Read also: Is It Worth Replacing iPad Battery?