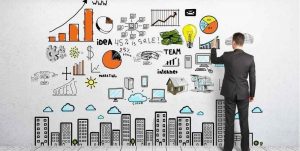 Decision making is something many of us take for granted.  It involves weighing the current and future prospects of all related issues and then heading in a direction that will maximize all of those factors.  In business, this needs to happen swiftly to take advantage of an opportunity or to move on to other pressing issues (instead of wasting extra time and still making the same decision in the end!).

Our brain is the central organ in our ability to make decisions.  The better our brain runs, the better our decisions!  Food, sleep cycles, activity levels, and perceived mental stress all play a role in the decision-making centers of our brains.  Understanding the evolutionary development of our brains will help explain how this works.

As our brain developed, we first had the brain-stem.  This runs most basic centers like heart-rate, breathing, sleep/wake cycles, hunger, and blood pressure.  As we evolved into mammals we developed a higher center of our brain called the mid-brain.

The Legal Issues of Writing a Memoir

This is our emotional center.  Emotions are, basically, really effective ways of remembering situations faster that are either dangerous or safe.  If we heard a rustling in the brush and a bear jumped out 30 seconds later, we would develop the emotion of fear with rustling brush.

The next time we hear rustling brush we automatically run away due to fear and are even more likely to survive because we get away from the bear faster.

Evolving further into human beings allowed us to develop decision-making.  We can control our emotional centers if we decide whether to listen to them or not.  Lets say we see our cousin enter the brush, then three minutes later we hear rustling.

The mammalian part of our brain would have us run away immediately, but the human part of our immediate stream of consciousness would say “I saw my cousin walk in there; this is the middle of the day; there are not often bears down here in mid-day; I don’t need to run away”.  Thus, a better decision is made based on more information quickly and easily.

When we eat a poor diet, chemicals in our brain diminish our ability to access the decision-making center.  Instead, our mammalian brain tends to take over.  Ever see a child throw a tantrum shortly after a sugar-binge?  That’s their mammalian brain taking over.

5 Ways to Build and Improve PageRank

Ever seen a child who missed their nap throw a tantrum?  Same thing.  Ever see an adult get mad at their computer or yell at traffic when they had trouble sleeping the night before?  The emotional outbursts do not improve the situation, they are simply a reaction to a feeling.  All are examples of emotional outbursts taking place of calm, rational decisions.

Poor diet, poor sleep, too much or too little activity will create a stress response in our body that shuts down our decision making centers.  As a result, when that salesman comes in to discuss a better brand of computer for your company you may have to think about it for three days before deciding that the cost will not be worth the minimal improvement in productivity for your company.

Think of everything you have to put off while you debate the pros and cons of the purchase.  BUT, if you eat a better diet, get good sleep, and exercise the right amount that decision is made in a few moments, you’re able to continue on with your day, and you’re that much more productive in your business!

Eating a good diet, prioritizing regular sleep, and exercising right will allow you to master your decision making.  It will happen both faster and more-often be the correct choice.  Make your health your priority and your small business decisions will thank you!!