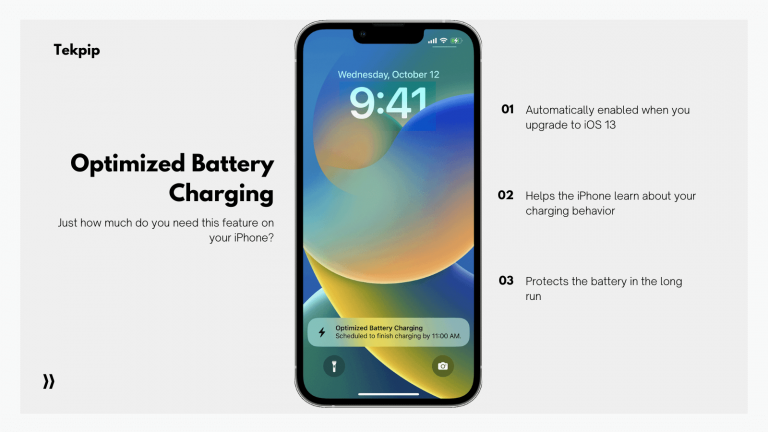 To prevent battery aging, Apple introduced the Optimized Charging feature in iOS 13. So, if you are using iOS 13 or later on your iPhone, you may have noticed that the battery is usually only charged up to 80 percent.

However, this is not a bug but an iOS feature called “Optimized battery charging.” It’s intended to extend battery life. So Apple has good intentions even though it needs to learn about your locations and usage habits for the function to work.

In this article, I’ll like to explain the background for optimized iPhone charging and whether it’s good to have it activated. Then, finally, I’ll show you how to disable the feature should you be irritated at how it disrupts your charging experience and phone usage.

Optimized battery charging is a phone feature you should keep enabled. It keeps your phone battery healthy and saves you money from getting battery replacements.

The average iPhone battery lasts two to four years, but with proper care and optimization, it can last up to a decade or more.

Manufacturers are trying to meet these demands in a world where fast charging of mobile phones is becoming more important to users. For example, Apple included an 18 W fast charger with the iPhone 11 Pro. You can use this to charge half of the battery within 30 minutes.

Above all, however, the behavior of mobile phone owners means that battery life is becoming ever shorter. And with apps, video streaming, and other power-guzzling uses of smartphones, this eventually leads to the battery being empty again during the day, even if you charged it overnight.

But overnight charging is a bad habit that damages the battery. So apple now wants to stop this with optimized charging to protect smartphones and their owners.

Until now, you might have thought that charging your smartphone next to your bed was only unhealthy for you. But it’s worse for the phone!

The battery level reaches 100 percent long before the end of bed rest. And to ensure that this value is maintained in the morning, the battery keeps charging, charging, and charging.

Electricity constantly flows so that you have a full battery in the morning. But that puts immense stress on the battery due to the heat generated.

Apple knows about the wear and tear overnight charging causes its phones, which is why Apple rolled out optimized charging to iOS users.

What Is Optimized Battery Charging?

Optimized Battery Charging is a battery-optimizing iOS function that is automatically enabled when you upgrade to iOS 13 or later. You can also activate this feature in iOS settings.

When enabled, it helps the iPhone learn about your charging behavior. So it knows when you typically plug it in for long periods. Usually, this will be at night. After that, the charging process is stopped at 80 percent, and the remaining 20 percent is only done before getting up.

Optimized charging protects the battery in the long run since the chemical aging of the battery progresses more slowly. The iPhone uses lithium-ion batteries that age over time. The battery’s performance is influenced by various factors, such as the temperature profile and charging cycles.

The more charge cycles a battery has, the lower the maximum charge capacity. A cycle describes a charge from zero to 100 percent. You can see the health of your battery by going to Settings > Battery > Battery Health & Charging.

Read also: Is It Worth Replacing iPad Battery?

How to Enable Optimized Charging on Your iPhone

You can activate Optimized Charging in just a few steps.

If the function is switched on, the iPhone will always show you on the lock screen when the battery level is expected to reach 100 percent.

If it’s too late and you feel the battery won’t finish charging before you head out, tap and hold the notification. Then click Charge now.

This disables optimized charging for the moment and helps you work around the 80 percent rule. But you have to do it ahead of time so the phone has the time to charge fully.

You can fast charge it with an Apple power adapter rated 18W to 140W and a USB-C to Lightning cable. This way, you will be able to refill the battery in a particularly shorter time.

But you shouldn’t do this (use the Charge Now option) too often. The quality of the battery decreases over the long term due to continuous fast and full charging.

Read also: My Phone Died and Won’t Turn on or Charge – Working Fixes

Why Optimized battery charging Is not Working for You

If the process of activating Optimized battery charging explained earlier didn’t work for you,  Apple’s machine learning may have determined that you don’t need the feature at present.

You should know that it only works where you spend most of your time: at home and at work.

Apple limits the machine learning of its operating system to these locations. So, you must let iOS know where you are via location sharing, among other system configurations. So make sure you have the following enabled:

Go to Settings, tap Privacy > Location Services > Significant Locations, and toggle it on.

Read also: How to Fix My Samsung A70 and A71 Not Charging

Should I Turn Off Optimized Battery Charging – How to Do It

Apple recommends not turning off this feature. However, I’ll also advise you to keep it on. There’s a reason it’s called “optimized.”

But this function has a potential pitfall too. First, it uses an algorithm that monitors the usage habits of users.

The algorithm does seem to recognize calendar entries that indicate that the user is going on a trip. But if the user gets up earlier than normal, the battery is probably still at 80 percent. This can be very annoying if, for example, there is no more time to charge the rest. So, you can decide to turn it off temporarily to prevent this scenario.

How to Turn Off Optimized Battery Charging

You can switch the Optimized battery charging off just like I showed you to activate it.

Tip: Apple lets you choose whether to switch off the optimized iPhone charging for one day or forever. When you tap Turn Off Until Tomorrow, the feature will be back to work the next day. With Turn Off, the function will be gone forever until you turn it on again.

Do iPhones Turn on Automatically When Plugged In?

If your phone is turned off (not in standby mode), it turns on automatically when it detects a charging process. If you don’t want the phone turned on while charging, you can turn it off as soon as it powers on.

When Does Optimized Battery Charging Kick In?

The function is only active when the user is at home or at work. In other words, places where it seems safer and a power source is available. The function is deactivated on vacations, business trips, or when commuting between two areas of residence.

What Happens if I Turn off Optimized Battery Charging?

When you turn off the Optimized battery charging, your phone charges 100%. Don’t worry; even if you leave the charger on after it’s fully charged, charging will automatically stop. So your battery will not overcharge. But the problem is your phone battery will continue to top once the battery level drops from 100%. So charging your iPhone 100% too frequently can cause the battery to degrade.

If you can’t do without charging your iPhone overnight, you should have the Optimized battery charging switched on. With this function, iOS protects the battery by automatically charging it to only 80 percent. For the remaining 20 percent, the system takes time until it’s your normal time to get up. In addition, the function learns your iPhone usage and charging behavior automatically and intelligently with its machine-learning algorithm.

By the way: If you don’t have a clear charging routine or location but instead connect the iPhone to the power supply at undefined times, the activation of Optimized battery charging will not be successful. It requires a regular daily routine. This way, the iPhone can get to know your daily routine. And your phone is charged only when you want it.