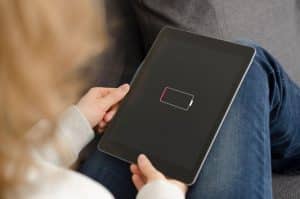 An iPad’s battery generally has a lifespan of a few years, but before it goes completely bad, you may start seeing tell-tale signs that your iPad’s battery is gradually dying.

When this happens, most iPad users are usually torn between getting their batteries replaced and buying a new phone entirely. In this article, we’ll tell you if it is worth replacing iPad battery and answer other questions you may have regarding issues with your iPad’s battery.

Is It Worth Replacing iPad Battery?

This is dependent on how old your iPad is and the condition of your iPad. The average lifespan of an iPad is about four years. After this period, you can replace the battery and keep using it. However, if your iPad is old or has been giving you problems, it would be better to swap it for a newer model and use it for the next couple of years instead of just replacing the battery.

How Much Does It Cost to Replace an iPad Battery?

If your iPad issue is covered under warranty you may not have to pay any fee, but if it is out of warranty, Apple will replace the battery or swap the iPad for $99 (plus $6.95 for shipping and tax).

How Many Years Does an iPad Battery Last?

An iPad battery can last up to 4 years without.

What Are the Signs Your iPad Is Dying?

Your iPad might be dying if you notice any of the following.

Why Is My iPad Losing Battery So Fast?

Your iPad may be losing battery fast due to any of the following reasons:

Can You Replace an iPad Battery Yourself?

No, you can’t replace your iPad battery yourself. iPads have sealed-in, non-removable batteries that you can’t replace yourself unless, of course, you’re tech-savvy or willing to risk destroying your iPad. It is not even worth it, given that you will still have to buy the tools and parts needed to replace the iPad battery with roughly the same amount that it will cost to have Apple replace it for you.

How Do You Know If Your iPad Battery Is Bad?

Early signs that your iPad battery has gone bad include your device shutting OFF randomly or when it reboots and comes back ON with a different battery percentage to the one it had before shutting OFF. Those are more common indicators that the iPad battery is bad

The most severe symptom of a bad battery in an iPad is swelling of the battery. You may not notice it until it begins to put pressure on the screen, pushing up the glass and LCD and causing pressure marks that look like tiny blemishes on your screen. If the battery is not replaced, it will continue to swell and put pressure on the LCD until your iPad screen cracks.

How Do I Revive A Dead iPad Battery?

If your iPad battery is dead and isn’t responding, you can revive your dead iPad battery using the tips below:

Plug your iPad into a power source and allow it to charge. If the red section of the battery image flashes three times and then the screen goes blank, it means that the iPad is not receiving enough power to charge the battery.

If the iPad battery is completely drained, you may not see the battery image for some minutes. If the display remains blank, you might need to take the iPad to a technician to check the battery and charging port.

Another way to revive your dead iPad battery is to reboot or restart your iPad. To do this, press and hold down the sleep/wake button on the top until the red slider appears, and then drag it across to turn your device off. Repeat the process to turn it back on.

I would recommend connecting your iPad to a computer and trying to update it through iTunes/Finder. The purpose of this update is to protect your data while it uninstalls and reinstalls the iOS.

This works like jump-starting a car as the update is meant to flush any bugs you have on the software. If the issue for the dead battery is completely a battery issue, then you might need to contact Apple support.

Read also: How to Control F on iPad With or Without Keyboard

Back-up and restore the iPad

Alternatively, to revive your dead iPad battery, you may need to back up and restore your iPad.

First, make sure you have upgraded to the latest version of iTunes, connect your iPad to your computer, and select your device when it appears under Devices in iTunes.

At this point, you should perform a sync if you haven’t recently done so. This is to make sure all your contacts, photos, and videos are in sync.

Next, click on the “Summary” tab and click “Restore”. If you haven’t already backed up your iPad, you will be prompted to do so now; click on “Restore” at the next prompt. Then wait until your iPad completes the restore process and returns to the home screen.

Apple’s implementing a feature in the IOS that allows you to check your battery health anytime is a welcome development for those using Apple devices.

To check your iPad battery health, go to Settings >> Battery >> health. Here, the capacity of your battery will be displayed. If your battery health is below 85%, it is recommended that you replace the iPad battery.  Generally, if your iPad is beginning to give you problems, especially when it’s old, it might be time to start thinking about upgrading to a newer model.