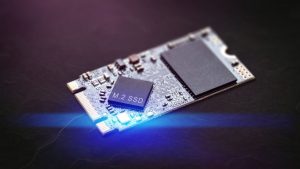 If you use a 256GB SSD instead of an HDD, your laptop will run much. 256GB of storage would most likely be enough for the average PC user. Besides, if you know you’ll need more storage space, consider upgrading to a larger SSD or storing your information on external storage such as an external hard drive or cloud storage.

Is 256GB SSD Enough for Gaming?

Yes, 256GB is sufficient for gaming. However, whether or not a 256GB SSD is sufficient for your gaming experience is dependent on the type of games you play and the number of games you intend to play. Because many games now require around 50GB of disk space, so an SSD of this size will quickly fill up, and you’ll have to keep uninstalling games just to keep enough space.

If you’re a hardcore gamer, I recommend getting a laptop with at least 512GB SSD. Even better is a 1TB SSD.

Is 256GB SSD Enough for Photoshop?

Yes, 256GB SSD is enough for Photoshop, but try to keep your drive as clear as possible. Photoshop needs a large amount of “scratch disc” space while working on a file and if you’re working on a large, multi-layered file, you might find that you’ll need more than 100GB of free space for PS to run well.

It’s preferable to get a higher SSD if you can afford it or you could get an external hard drive with a high capacity (at least 1TB) for storing your completed projects. So whenever you finish a project, save it to an external drive or cloud storage to free up space on your laptop.

Yes, 256GB SSD is just perfect for basic laptop usage. Most laptops that come with SSD usually have just 128GB or 256GB of storage, which is enough for all your programs and a decent amount of data. A 256GB SSD will be sufficient if you only need to run a few programs like a browser, video and photo editing, light gaming, a music player, and a document editing program. However, if you want to do a lot more intensive gaming, video editing, and photo editing, a 256GB SSD will not be enough.

Users who have lots of demanding games or huge media collections will want to store some files in the cloud or add an external hard drive.

Read also: How Long Should A Laptop Last

Is 256GB SSD Enough for Desktop?

256GB is plenty for most tasks on a desktop. However, if you’re storing things like video or 3D models, it might soon fill up. It may also be on the small side if you plan on installing a lot of games (and/or apps). 256 GB SSD would provide between 223 and 230 GB of use, with 40 GB being used for BIOS and other PC-related drivers (assuming you use Windows 10) leaving you with about 180GB.

You could, of course, buy an extra external drive to store data that you only need sometimes; they’re usually inexpensive plus the advantage to that is, you won’t be bothered by something extra hanging from your computer because you don’t have to worry about mobility while using your desktop.

For engineering students, a 256GB SSD is sufficient; however, RAM and CPU are more important. You could go for 512GB SSD if you can afford it, but a 256GB SSD will suffice. Most engineering software is usually under 30 GB and if you need more space, you can get an external hard drive or save your files on the cloud.

Yes, a 256GB SSD is enough for most graphic design demands. A solid-state drive (SSD) is far superior to a regular hard drive in terms of speed which is what you need as a graphic designer. For storage, you’ll need at least 256GB, but how much storage you’ll need in the long run will be determined by how much designing you do and the size of the files you work with. Although some graphic designers recommend 512GB SSD which seems to be enough for everything long term.

You know how much media you make and save, so keep that in mind when deciding on good storage to go for when shopping for a PC. Overall, though, a 256GB SSD will be enough for people with a moderate storage requirement.