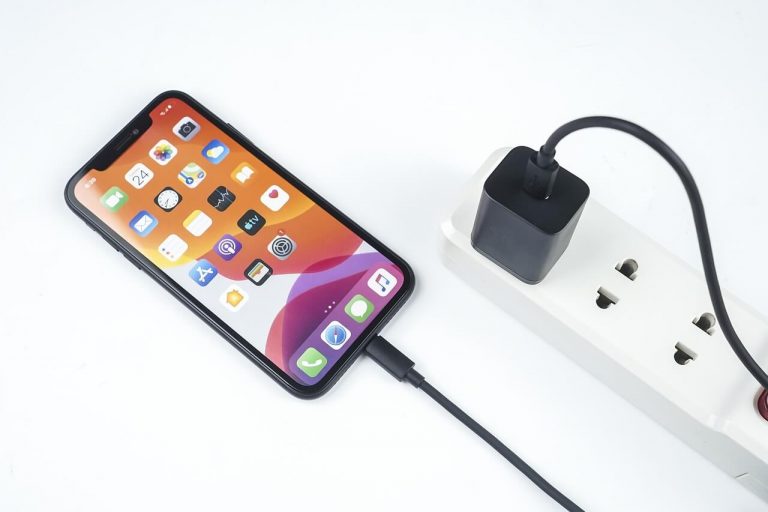 You’re on Tiktok watching a very funny video and, oops! – Your battery’s run down. You go to plug your phone in and continue watching the video, but after the 10th video, you notice that the battery percentage has not increased, maybe it even reduced… panic ensues. Why is this happening? What do you do?

If this is your current situation, relax, you are not alone. The “iPhone showing charging but battery percentage not increasing” issue is one that some iPhone users have experienced more than once and they will tell you that panic is not the way to go. This article will highlight the possible causes for this issue and give some of the best fixes to get your iPhone charging as it should.

Why is your iPhone Showing Charging but Battery Percentage Not Increasing?

Your “iPhone showing charging but battery percentage not increasing” issue might be caused by background apps running, a damaged battery, or an incompatible charger. You might have several apps open on your iPhone that you aren’t using and some of these apps will keep refreshing or running whether you switch back to them or not. This could prevent your battery from charging properly even when the phone is plugged in because there are too many apps utilizing the battery at the same time.

Another reason why you might be facing this issue is that your charger cable or adapter is damaged or incompatible. Cheap third-party chargers are known to become faulty faster. If you are using one of these chargers and are facing the “iPhone showing charging but battery percentage not increasing” issue then the charger could be the cause. Your Apple-certified charger could also become damaged after years of use and this might cause your battery percent to be stuck even when plugged in.

When dealing with the “iPhone showing charging but battery percentage not increasing” issue, you should also consider the charging port of your iPhone. Your phone’s charging port might’ve become damaged due to frequent plugging and unplugging improper connection, or water damage. This might cause your battery to stop charging or discharge while the phone is plugged in. The charging port might also have some dirt or debris stuck in it, affecting the necessary connection to get the battery charging properly.

Here’s a guide to cleaning a charging port: How to Get Water Out Of Phone Charging Port

Everything on the iPhone is controlled by the software so when you come across the “Phone showing charging but battery percentage not increasing” issue, you might want to check your iPhone iOS version for any updates. This issue might occur due to software glitches on your phone, and software glitches can be caused by apps or games downloaded from the app store, an interrupted software update, or a glitch as a result of an update.

A common reason one might consider is the failure of the iPhone battery. An iPhone battery might fail from the frequent use of low-quality, third-party charger cables, and adapters. It might also fail due to a defect in the gas gauge line between the logic board and the battery. Water damage is also a common cause of battery failure.

If your iPhone has been repaired or opened before, then the issue might be with a missing component on the logic board – probably the FL 11. This component is tiny and could get easily knocked off when connecting or disconnecting the battery.

Another reason you might experience the “iPhone showing charging but battery percentage not increasing” issue is because your iPhone battery is not calibrated or its calibration has become corrupt. When this happens, battery details, assessments, and computations also become corrupt and this might cause your phone to misread the battery state. Your phone might be showing the incorrect battery percentage making you think it is not charging.

How to fix iPhone Showing Charging but Battery Percentage Not Increasing

The next thing to try if the above step doesn’t work for you is to check out your phone’s charging port.

Doing a hard reset on your iPhone is sometimes the only thing you need to do to fix both hardware and software-related issues.

For iPhone 8 and newer:

After doing a hard reset, plug your iPhone in and leave it to charge for about 30 minutes, then check the battery percentage.

As earlier stated, you might have several apps running or refreshing in the background and draining your battery while it is plugged in. To fix this;

Doing this would keep all your media and files but reset all your preferred settings like wallpaper, notifications, sound, and keyboard. To do this;

Another fix you should try if nothing has worked so far is recalibration. After years of use, your battery’s calibration might become corrupt, this can easily be fixed with the following steps:

If all the fixes above do not fix your “iPhone showing charging but battery percentage not increasing” issue, then you might want to take your phone to the nearest Apple store and have them check it. The issue might be a failed battery and this can be fixed with a replacement.

When facing issues with charging your iPhone, it might not necessarily be a battery failure, the problem might be from the phone itself and maybe a software glitch that a hard reset can’t fix. It could also be a hardware issue like a damaged charging port. We recommend taking the phone to your local Apple store for a proper fix. This is highly recommended especially when your phone is still under warranty.