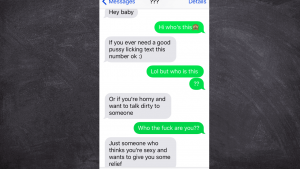 While spam texts to buy certain products or to meet new people in my area is something pretty much every one of us has had to deal with, I recently started to notice something very strange. In contrast to the spam messages that have been harmless, and that I delete and never have to think about, I keep getting dirty texts from random numbers, and that makes blocking them useless because blocking one number doesn’t stop the messages.

For me, this is a problem because my kids play around with my phone, and even though the wife will understand, I can’t imagine how this will affect my kids. I did some research on having this fixed, so here is my article on how I fixed it in my case and how you can too.

I Keep Getting Dirty Texts from Random Numbers, But Here’s What I Do

The first thing we would want to reiterate is that these are likely spoofed numbers. Basically, software is used to send messages, and recipients see random numbers, numbers that are in many cases not actually in service, hence how easy it is for these spammers to send you these messages nonstop. So while blocking might help, chances that they will use the same number the next time is slim, so blocking isn’t a permanent fix.

Am sure these scammers have a way of tracking who clicks on the links in the texts, and that is something you don’t want to do. Many of these are short links, so you don’t always know where they’ll lead to when you click on them. Always delete the texts when you receive them.

Don’t Reply To the Messages

Just like link clicks, replying to the messages might indicate that you are engaging with them, in which case you will continue getting the dirty text messages. Not engaging with their message in any way might signal to them that they have an inactive number and might lead to them removing you from their bulk text messages list.

While this particular fix might not be the best for some of you, blocking messages from unknown numbers helps me when I keep getting dirty texts from random numbers.

If you are using an iPhone or another iOS device, go to Settings >> scroll to Messages >> scroll down to Message Filtering >> turn ON Filter Unknown Senders.

If you’re using an Android device, what I do when I keep getting dirty texts from random numbers is, open the messaging app (I use Google’s messaging app) >> I tap the three vertical dots on the top right corner of the screen >> I tap Settings on the next page >> then Activate Spam Protection. (You’ll generally need to wait for a few days to be sure of the effectiveness of this setting)

Basically, any unsaved number that texts you will not be able to deliver, and for many of us, this is one of the most effective fixes when we keep getting dirty texts from random numbers.

Read also: Message Blocking Is Active – What It Means

While this might not be doing the job 100 percent, it has been helpful for me. After some time, check if the numbers are identifiable. If you notice that a couple of numbers are repeatedly sending you dirty texts, you just have to block them by touching and holding the message, then select something like “Block Sender” “Block” or “Block Number”.

After blocking said numbers, we will recommend contacting your carrier to complain about said numbers and also complaining about getting dirty texts from random numbers. Am sure they’ll be able to streamline where these messages originate from as it’s often very few bad actors sending all these messages.

Use an Anti-Spam App

These apps allow you set specific rules, including keywords, in hopes of blocking any messages that match these. You can get apps like Truecaller, Robokiller, Nomorobo, and YouMail. For me using an anti-spam app when I keep getting dirty texts from random numbers does the trick.

Read also: You Have Been Blocked From Originating Messages to ### Response – Working Fixes

Use SmartLimits (or something similar)

If I was ever again in a situation where I keep getting dirty texts from random numbers, something I recently discovered and that helps is a service offered by AT&T, it’s called “Smart Limits”. This blocks certain numbers (often numbers reported by other users for spam) and restricts access to inappropriate content for kids, either on the web or via texts. You might contact your carrier to know if they have something like this.

Marking any number that texts you dirty messages as spam should also do the job in many cases. Yes, it doesn’t stop the messages, but it is one little step towards stopping this spam epidemic.