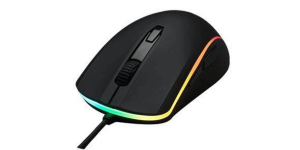 This HyperX Pulsefire Surge price, specs, and software review takes a look under the hood, examining the features of the RGB gaming mouse in detail, its best and also its not-so-goods. Let’s begin with a list of the Pulsefire Surge specifications.

The HyperX Pulsefire Surge price is now $47. The RGB gaming mouse is available on websites like eBay, Walmart, Amazon, Best Buy, and a couple of other smaller retail stores for gaming accessories. 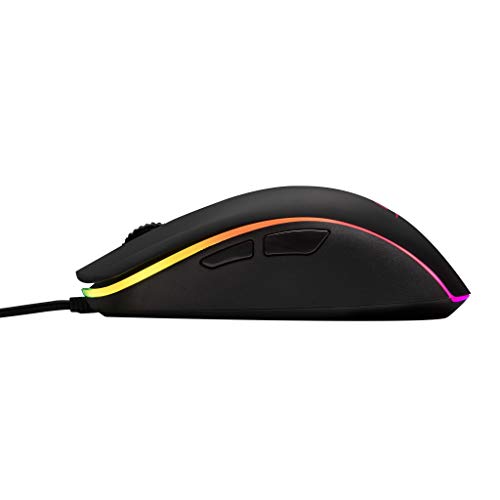 The Pulsefire Surge weighs around 100g, added to the weight of the braided cable, you get a gaming mouse that weighs a total of 130g. The braided cable is durable, lengthy enough to be able to have long swipes across the gaming desk without issues.

The Pulsefire Surge comes in a plastic build, it doesn’t feel too extra, and its setup is simple for even beginners. You get a wave effect with the Pulsefire Surge, the black design of the gaming mouse makes it blend with any desk especially if you game in a dark room. The mouse isn’t heavy as we have seen, it fills the hand, doesn’t slip or slide off during use.

The Pulsefire Surge also comes with customization options that include a weight system that can be customized, lighting, and buttons that can also be customized as you see fit. There is a DPI switch at the back of the scroll wheel with which you’d be able to switch between sensitivity options with ease, plus a back and forward button that’s easily accessible when gaming.

The HyperX Pulsefire Surge is compatible with Windows 10, 8, and 7, the Pixart 3389 Sensor goes up to 16000 DPI. The Omron switches are rated 50 million clicks, plus onboard memory that helps to store your custom settings.

The buttons, the clicking, the light weight of the mouse, the fact that it comes with customizations to fit your gaming preference all add up to make this one of the best-designed gaming mice we have tested.

If you are playing FPS games, then the HyperX Pulsefire Surge does a neat job as the weight and body help with gliding smoothly around the desk. Its small size makes it a great option for people who have large hands. The mouse didn’t feel painful when we had to grip it for multiple hours of gaming.

I played ultra-competitive shooter games like Overwatch with this gaming mouse and I appreciated the 16,000 DPI sensitivity that the Pixart 3389 sensor provided. I didn’t have issues switching between heroes; in fact, the on-the-fly DPI customization we did on the mouse made the switching between heroes like Reinhardt and Windowmaker seamless.

The mouse is also very clicky and very responsive, while the wheel delivers one of the most satisfying scrolls I have seen. The side button design and performance were also on point. The buttons are not stiff, neither are they squishy, they are very responsive and tactile. So you don’t have to press hard on them to have them respond while you also won’t mistakenly hit them, two things you’d appreciate on a gaming mouse.

I can’t complete a review of the performance and design of the HyperX Pulsefire Surge without pointing out that it comes with support for left-handed video gamers. This is one niche of the mouse-buying market that is really underserved, so it’s nice to have a mouse that works for both left and right-handed players.

The buttons on the mouse can be adjusted to your preference, while you also get a chance to create personalized profiles and have them saved for future use. With the software, you can easily switch between gaming profiles and set the mouse to be able to switch between button configurations in-game.

The NGENUITY software is pretty easy to install and configure even for beginners, so that shouldn’t be an issue.

I feel, though, that the HyperX Pulsefire Surge software needs some extra polish. I experienced some issues with program-launching. Overall, it did a good job of having things set up fast.

The HyperX Pulsefire Surge price, specs, and software are some of the best we have tested. The gaming mouse isn’t too pricey, it comes with some features everyone would appreciate having, and its software/driver is pretty easy to set up and use. Is it the best gaming mouse on the market? Not by any means. But does it provide the features the average competitive gamer needs? By all means.