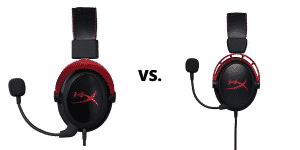 HyperX gaming headsets are some of the best types of gaming headsets on the market, and with a range of quality gaming headsets, getting one that’s great for you can sometimes get confusing. So I have put this HyperX Cloud Alpha vs. Cloud 2 comparison together to help you make the best decision when choosing a headset for your PC, Xbox, and PS4 gaming.

HyperX Cloud Alpha is one of the best options when it comes to the quality of sound. I used this gaming headset with an Xbox One Controller, and it does a great job. The sound was crisp clean, pretty neat, the bass was also OK, doesn’t feel overpowering.

The headset also has healthy details of highs and lows, and the in-game directional noises were OK. The headset also provides good comfort around the head, doesn’t feel too hard on the ears. The sound was also loud, and it feels more comfortable the more you use the headset. The HyperX Cloud Alpha supports gaming consoles like Xbox, PS4, and PS4 Pro, you’ll also be able to use it with your gaming PC.

While I thought that the directional noises are OK for most users, I feel they are somewhat off. I feel that things that are behind you, on the right, left, center, and front all sound the same, and it’s pretty hard to tell where the sound is coming from.

On the other hand, the HyperX Cloud 2 comes with support for gaming PCs, Xbox One, PS4, and PS4 Pro. Cloud II comes with a 7.1 virtual surround sound that provides better immersion in games. Cloud II also comes with a comfortable foam that sits well on the head and doesn’t cause headaches during extended gaming periods.

The quality of the sound was great, and compared to the HyperX Cloud Alpha, I feel the directional sound from the HyperX Cloud 2 was a mile better. Cloud 2 provides better immersion and cancels out all outside noise.

When it comes to the design, the HyperX Cloud Alpha is one of the most premium-looking headsets I have tried from HyperX. It feels like an upgrade and an addition to the designs of the Cloud 2. It comes with red perforated aluminum forks that help to keep the ear cups in place. The headset also sports brushed-metal material on the outer ear cups.

The design allows for easy removal of the mic when you’re not gaming or playing multiplayer games. It also comes with a 3.5mm cable, which is great if you plan to take the headset on a journey. The headset comes with a very soft protective pouch, which helps to keep the headset safe. The one thing that seemed like a con to me will be the inability to lay the cups flat when storing them away.

HyperX Cloud II is also pretty stylish, and for its price, remains one of the best designs you can expect. The headset comes with a leatherette-coated band, the ear cups are also connected by metal cups, so you’re able to adjust it about an inch higher and lower. The ear cups also swivel back and forth, the exteriors are sporty and sleek.

The mic can be adjusted by up to 6 inches, the tip has a large foam, while the mic is made from a flexible coil. The mic is detachable in case you want to use it for travel and single-player gaming. You also get a USB dongle with which you can control the volume in chats, games and easily toggle between the surround sound and muting the microphone.

The HyperX Cloud Alpha is well-tailored to the demands of in-game and streaming voice chat. I noticed that the HyperX Cloud Alpha makes you sound different when you’re using the mic over some voice clients. It slightly emphasizes notes while de-emphasizing the range of fundamental notes.

The HyperX Cloud II on the other hand comes with a mic that’s crystal clear and also well-made. The sound quality that the mic produces is good enough, if not great; and whether you have a deep voice or not, everyone on the other side of the stream can hear you clearly. I noticed that the sound card disables the Windows mic volume control while using the headset for PC gaming.

Overall, these two MICs provide great quality for all users, but you can’t compare them to the power of a dedicated/standalone mic. If you’re more concerned about the quality of your audio, I will recommend the HyperX Cloud II or a very powerful standalone mic for your streams.

We can’t do a HyperX Cloud Alpha vs. Cloud 2 comparison without talking about how they perform in the real gaming world. The HyperX Cloud Alpha delivered amazing sound quality for games like Injustice 2, Overwatch, Destiny 2, Resident Evil Revelations, and Forza Horizon 3.

From highlighting the lows of every punch and explosion to the subtle rustling of tree branches to being able to hear enemies coming, to punchy gun sounds, to delivering amazing atmospheric action, the HyperX Cloud Alpha remains a great option for gamers. The one thing I didn’t like, which I mentioned earlier, was the lower quality of the multi-directional sound that I got from the headset. But overall, it’s worth every dime spent on it.

The HyperX Cloud II also provided crisp sound on all the games we tested it on, but right off the bat, I noticed that it lacks low end. Even the use of the Surround Sound 7.1 didn’t make much of a difference as I would have expected. While you got the volume and surround sound controls on the dongle, you don’t get as much control over the performance of the headset as we got on the HyperX Cloud Alpha.

While the mic on the HyperX Cloud II does a good job of identifying your voice even if you moved it farther from the face, it does collect minimal background noise, which isn’t really great if you want to stream with this mic.

The price of the HyperX Cloud Alpha is $99. It is available on top marketplaces like eBay, Amazon, and Walmart. The Price of the HyperX Cloud 2 is $95. It is also available for sale on most marketplaces. The best place to get these at good pricing, with good customer support and a chance to read customer reviews is Amazon as all reviewers are verified purchasers of the gaming headsets.