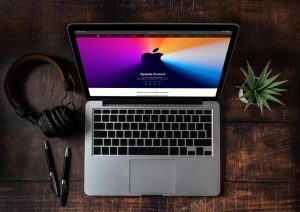 To screenshot on a MacBook Pro & Air, press the ‘Command’, ‘Shift, and ‘3’ buttons together. This combination captures your entire screen. After pressing these buttons, you should hear a photo clicking sound and see a floating thumbnail of your screenshot towards the lower right corner of your screen – almost like it is on an iPhone.

When this thumbnail disappears, it means the image has been saved to your desktop. You can click on the floating thumbnail to edit it, right-click on it to see more options, and swipe to dismiss it. If you wish to copy your screenshot to your clipboard, simply press the ‘Control’ key while taking the screenshot.

Method 2: Use a screenshot tool to Screenshot on A MacBook Pro, Air

Another way to take a screenshot on a MacBook is by using the screenshot tool. This tool can be launched by pressing the ‘Command’, ‘Shift’, and ‘5’ keys together or navigating to Launchpad >> Other >> Screenshot. Once launched, you should see a small bar at the bottom of your screen. The first three icons will screenshot the entire screen, a particular window, and a selected section respectively.

The next two icons are for recording the entire screen and a selected section of it, and after this is the ‘Options’ button that lets you set a timer, choose a location to save your screenshot, or record and adjust some other screenshot options. The ‘X’ button on the left end is for closing the tool and on the right end is the ‘Capture’ button that takes the screenshot.

Follow the steps below to use this screenshot tool:

Read also: Where is the Microphone on MacBook Air, Mac Desktop, & Ma

METHOD 3: Use the Touch Bar

How To Take Screenshot On Chromebook

To take a screenshot on Chromebook, press the ‘CTRL’ and ‘Show open windows’ buttons together. This combination will take a screenshot of your entire screen. After taking the screenshot, you should see a small thumbnail of your screenshot and options to ‘Copy to clipboard’ or ‘Annotate image’. You can decide to copy the image to your clipboard using the ‘CTRL’ and ‘V’ buttons to paste it anywhere or edit the image however you like. You can also just click the thumbnail to see the screenshot or find the file in your ‘Downloads’ folder.

To take a screenshot of a selected section of your screen, press the ‘Shift’, ‘CTRL’, and ‘Show open Windows’ buttons together. After doing this, your pointer will temporarily become a cross-hair. Use this cross-hair to make your selection, then release to capture the image. Like the method above, you will see also see the thumbnail at the lower right side of your screen to copy or edit the image. The image is then saved into your ‘Download’ folder.

For Chromebooks that support stylus input, the pen can also be used to take screenshots. Here’s how to do that:

Read also: How to Create an INI File on Windows, Mac, and Android