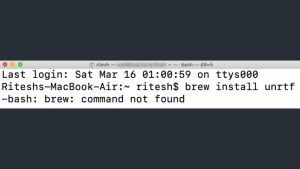 Many Mac users encounter the “brew command not found” error when running a brew command on their MacOS terminal. If you are currently experiencing this issue, don’t panic. It doesn’t mean there is an issue with your Mac. You just need to perform some actions.

Read this article to discover the working solutions you can try to fix the “brew: command not found” error.

What Is “Brew Command Not Found” In Mac?

Consider the explanation below for more clarity.

Generally, Unix systems usually hold directories where they check for the binaries of a command. Hence, the system usually checks its directories for a binary that matches the name of commands you run from your terminal.

If the system cannot find a matching binary, you will get the “command not found” error.

In this case, your system will search the list of directories in your PATH environment variable. If it doesn’t find the brew binary, it will return the “brew command not found” error.

How to Fix “Brew Command Not Found” – Best Tips

In this section, we’ll talk about some fixes you can try to solve the “brew command not found” issue. Try them to see which works for you.

When software isn’t running as it should, it is often a good idea to uninstall and reinstall. You can do the same with your Homebrew software.

Note that if you want to uninstall the Homebrew software completely, you will need to run an official uninstall script in your Mac terminal. Follow the steps below for guidance:

If you are in doubt, the command above is the official command recommended by the developers of Homebrew on Github.

Note that the Homebrew installer has recently been rewritten in Bash; that is why the command includes /bin/bash instead of ruby.

Most times, the Homebrew installer usually adds brew to PATH automatically. However, an interruption can occur during the process.

If your system couldn’t configure the brew environment variable, follow the steps below to avoid the “brew command not found” error.

Depending on the location you installed brew to, you might have to replace export PATH=”/usr/local/bin:$PATH” with export PATH=$PATH:/opt/homebrew/bin

Fix 3: Install ARM Version if you are using an M1/Apple Silicon device

You will need to install the ARM version of the Homebrew in “/opt/homebrew” instead of the regular “/usr/local/homebrew.”

– Run `brew help` to get started

Fix 4: Install XCode on your Mac

Most users have noticed that the Homebrew software did not run because they had not installed Xcode on their system. Follow the process below to install Xcode on your system.

It means you have Xcode on your system.

If you use a Mac M1, run this command instead:

After running it, close your terminal and reopen it again.

Read also: Apply Update from ADB – What It Is and How It Works

How Do I Enable Brew On My Mac?

You can follow the steps below if you want to enable Brew on your Mac.

The first thing you need to do is to download Xcode because it contains the tools that Homebrew needs to operate correctly.

It may take a while for Homebrew to finish installing, so you should wait until you see a successful installation message on your screen.

How Do I Add Brew To zsh?

Follow the steps below to add brew to zsh:

How Do I Know If I Have Homebrew Installed On My Mac?

Here are a few ways to know if you have already installed Homebrew on your Mac.

If you get this type of message: “zsh: command not found: brew,” it means you don’t have Homebrew on your system.

If you have Homebrew on your system, you will get a message indicating your Homebrew version type. You may also get a message that starts with something like this;

If you have Homebrew on your system, it will return a message indicating the file path of the Homebrew’s location.

However, if you don’t have Homebrew on your system, it will return an error message like this: “brew not found“

Where Is Brew Installed On Mac?

On Mac, Homebrew installs itself into the “/usr/local/bin directory.” This directory is always configured for access with the macOS default “$PATH environment variable.”

Should I Install Homebrew On My Mac?

If you want to increase how productive you are with your Mac, a command-line package management software can help you achieve that. You should consider the Homebrew software since it is one of the best free package managers.

It is also quite easy to use as long as you know how to use the Mac Terminal.

We hope we’ve been able to help you with a working solution to your “brew command not found” error.

If none of the solutions worked for you, you could consider making a complaint on Homebrew’s GitHub repository. Some of their developers may be able to help you.