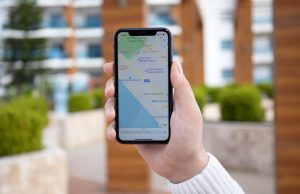 Even if some iPhone users still use Google Maps for navigation, a lot has happened with Apple Maps in the meantime, and the navigation is impressive. But if you’ve been using Apple Maps for a while, you must have wondered if you could change the spoken navigation voice.

Is it possible to set a different voice, such as a male voice, for navigation, and if so, how does it work? I’ll explain how to change voice on Apple Maps in this guide.

Can I Change Voice on Apple Maps?

The short answer is yes. Apple Maps currently use Siri’s voice or whatever voice is set for Siri. So, you can change the Apple Maps voice by selecting a different language via the iOS settings.

However, installing funny voices from Darth Vader, Homer Simpsons, and Co on Apple Maps is impossible. I don’t know why this is so. Maybe you can also make suggestions to Apple by using its feedback channel.

Note: The information above refers to devices without jailbreak. Perhaps something could be done with a jailbreak.

What Voice Can You Change Siri to?

Siri had a male voice up to iOS 7.1, after which the female voice was added. So, for example, you can choose between different versions of the assistant: British, American, Australian, each with a male or female voice, for a total of six options.

Remember that changing Siri’s location can affect your voice’s recognition.

This means that if you set Siri for the French accent, Siri is probably expecting the soft R or other characteristics of the transalpine idiom. However, Siri’s accuracy rate is highest for native English speakers.

Apple, through one of its discussion threads, informs users that Siri is programmed to recognize local accents:

“You can use Siri in any country or region, with any of the supported languages. Since Siri is designed to recognize accents and dialects of the supported countries or regions, Siri’s accuracy rate will be highest for native speakers.”

Siri uses accent recognition on its own and to our advantage. Could this mean that it is better not to change this setting?

Well, Siri is not yet so advanced as to make us notice the difference; at the same time, it is not enough for the difference to be so significant. But it may not be as efficient as it is with the correct language and location settings.

Having made this long and necessary premise, let’s see how to change the “voice” of Siri.

How to Change the Voice of Siri

Go to Settings >> Siri and Search >> Siri Voice. Choose the language you want from the options.

Once the choice has been made, the newly selected voice will be downloaded to the device. With some nationality settings, you can also choose the accent.

Why Change the Voice of Siri?

According to a study by Harris Interactive, almost half of the population of the United States think that a female voice is more comforting and reassuring than a man’s. Conversely, respondents believe a male voice expresses strength, persuasion, or seduction better.

Of course, all these criteria depend on the specificities of each voice language and accent. You can experiment and see which voice you are most comfortable with. Virtual assistants, particularly Siri, take an important place on smartphones and navigations.

Controlling Your iPhone With Your Voice

Today, asides from navigation directions, Siri can do hundreds of things, including reading articles aloud, giving you today’s weather, and even creating localized reminders.

And don’t think all these features are only for the visually impaired. For example, in the car or on the street, it is more pleasant to read an email, an SMS, or make a call without having to type on the screen of your iPhone.

Please note Siri only works if your iPhone is connected to the internet. To activate Siri, you need to follow this procedure.

To check if the activation was successful, take your iPhone in hand. Say “Hey, Siri” to activate your iPhone’s assistant. Then ask your question. Please note that your phone screen must be facing up.

For people who are used to using a wired or Bluetooth headset, Siri activates in two different ways. Either by leaving the finger pressed for several seconds on the button used to pick up telephone calls or by keeping the home button pressed.

Your voice is enough to get driving directions with your iPhone and iPad. You can use simple voice commands to transform both Apple devices into digital road maps through Siri, even when both hands are on the wheel. There is no possibility of approaching and managing the operation manually.

How to Find Businesses with Siri Through Apple Maps

First, ensure you have previously enabled the Hey Siri mode, as I showed you earlier. Next, you have to say “directions to the nearest restaurant” and select the desired option if more than one is shown.

The Maps app will open at that point, asking you to choose the travel mode. If you don’t have an address, you can still find bars, pizzerias, restaurants, and so on without touching the devices.

How to Find Your Way Home Using Apple Maps

If you are lost, you can go home with help from Siri. Just say, “Hey Siri, take me home,” to start the navigator of the Apple Maps app with home directions.

First, ensure you have entered the address in the appropriate box in the contact list. Just one click, and you’ll be able to use Apple Maps hands-free when you get lost in the future.

How to Change the Voice on Google Maps

Android devices have a feature dedicated to changing the voice tone on Google Maps.

If you use a language other than the default, Google Maps will continue to provide you with turn-by-turn directions but no longer speak street names.

How to change voice on Google Maps iPhone

Choose the language you prefer in your device Settings by going to the General >> Language and Region  >> iPhone Language sections.

Finally, choose the language that you want to use. If everything goes well, the next time you start Google Maps, the guiding voice should “speak” the language chosen previously.

On iPhone, go to the Settings >> Siri and iOS search menu, tap on Siri Voice and choose whether to use the female voice or the male one by tapping on the appropriate option.

To adjust the volume of the directions provided by Maps, go to the Settings >> iOS Maps menu, tap the navigation and directions option, and adjust the setting as you see fit, using the options under the heading Navigation voice volume.

How to Change the Voice of the Google Assistant

On your Android, open the Google app by recalling it from the Home screen or the drawer, tap the […] button at the bottom right, and then on the Settings item.

Now, tap on the Google Assistant option, then Assistant’s Voice on the next screen, and choose the voice tone you prefer by tapping on the colored circles at the top.