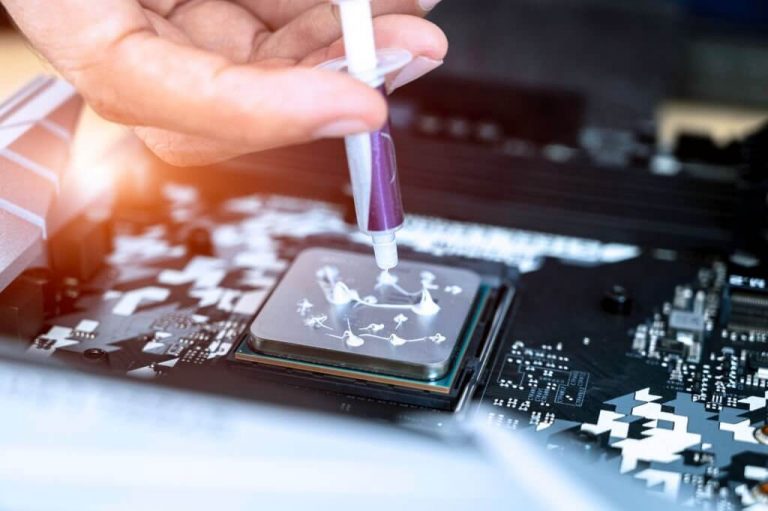 Like a car engine, your computer sometimes gets hot, especially during heavy use. And just like a car, your pc has a built-in feature that protects it against overheating, and a thermal paste is one of those components. Keep reading to know what it does and how long the thermal paste lasts.

What is a thermal paste?

A thermal paste, also known as thermal grease, thermal interface material, or CPU grease, is a heat conductive (but usually electrically insulated) chemical compound applied between a heat sink and the surface of the CPU (or whatever the heat source is).

The heat sink is the component that draws heat away from the CPU by conduction. It doesn’t have a microscopically smooth surface, having dents and gaps on its surface. These tiny gaps and dents trap air, making heat transfer between CPU and heat sink inefficient. The thermal paste creates an even, smooth point of contact between the heat sink and the heat source, filling in the dents and gaps that trap air, ensuring heat is drawn away from the CPU and dissipated more efficiently.

What is a thermal paste made of?

Thermal pastes are usually made of a polymerizable liquid matrix with a considerable volume of thermally conductive but electrically insulating filler.

The metal oxides or nitrides act as the conducting materials, and the adhesives act as the carrying medium. As a result, silver thermal pastes have a higher conductivity rating. They are made of tiny micronized silver particles suspended in a ceramic or silicone medium. But metal-based thermal pastes risk damaging the system if they flow into circuits since they are electrically conductive and capacitive.

How often should I replace the thermal paste on the CPU?

You should bear in mind that not all thermal pastes maintain the same level of effectiveness.

How long does thermal paste last in the tube?

The shelf life of whatever thermal paste you buy depends on the type of compound it is and its storage conditions. Most market types will have an average shelf life of two years if the paste is stored in a cool, dry place and out of direct sunlight with its cap appropriately covered. To recognize a thermal compound that’s gone bad – it’s either going to be completely dried out, hard or flaky.

How To Apply Thermal Paste – Step-By-Step

The most straightforward application method is to place a little pea-sized drop on the processor’s surface. Then gently attach the heat sink to the processor plate, equally applying pressure on the four corners. This ensures the thermal paste is spread evenly across the surface. If your thermal paste comes with an applicator, you can use it to spread the paste evenly. Some people prefer this method to ensure the paste is applied perfectly before clamping the processor’s heat sink.

There are even more intricate ways to apply the paste and the areas that span the processor’s cores. This would require knowledge of where the cores are, so this isn’t for everyone. However, if you’re still willing to get a more efficient thermal paste spread, follow the steps below:

For the Vertical Line method, these are the processors it works for:

For the Horizontal Method:

For the Middle Dot method:

For the Surface Spread method:

If your heatsink has thermal material or a thermal pad on it, the existing material or pad must be removed before applying the new thermal compound.

Only the new paste should be between the CPU plate and the heat sink. Do not use any petroleum-based cleaners or automotive degreasers on the CPU base cap or heat sink surface. Automotive oil is designed not to evaporate. It will fill the microscopic dents and gaps in the metal, significantly reducing the effectiveness of any subsequently applied thermal compound.

How to remove old thermal paste

Thermal pads are mostly paraffin wax that melts once it gets hot. As it melts, the wax fills the microscopic dents and gaps in the heatsink and plate of the CPU. Therefore, to prevent permanent contamination of the heatsink and CPU plate, the thermal pad should be removed from the heatsink before turning ON the computer.

It is wrong to use heat or hot water to remove the pad, as the heat can melt the wax into the heatsink. Also, take care not to scratch the surface of the heat sink when removing the pad.

A plastic tool like a credit card can scrape OFF the thermal pad without scratching the metal surface. The remnants of the wax could then be easily removed with high-purity isopropyl alcohol or carburetor cleaner and a lint-free cloth (a lens cleaning cloth or a coffee filter).

If you use a xylene-based cleaner, always follow up with a cleaning of high-purity isopropyl alcohol.
Protect the surface from foreign materials and do not touch the surface after as hair, pieces of lint, dead skin cells, or oils can significantly affect the thermal conduction performance. For example, oils from fingerprints can be as thick as 0.005″ and can severely hinder performance by preventing the thermal conducting matrix or filler from directly touching the metal surfaces.

Place the nozzle of the plunger pointing down the midline of the CPU cap, and to the left, apply a 1 mm wide line of thermal paste approximately 3 mm from the borders on each side. The line crosses over the dual or quad cores of the processor. It is more effective to have the compound line over the cords of the processor than to have it all over the surface of the plate from end to end as heat passes directly over the chords. Below all the methods are procedures for attaching the heatsink.

Place the nozzle of the plunger pointing down the midline of the CPU cap, and from top to bottom, apply a 1 mm wide line of thermal paste approximately 3 mm from the borders on the top and bottom sides. The line crosses over the dual or quad cores of the processor line in the vertical method.

Apply a blob of thermal paste to a corner of the CPU plate. The amount of thermal compound to apply depends on the surface area of your plate. For a small single-core CPU, use about 1-2 cubic millimeters, which is approx. 1/2 uncooked grain of white rice, and for a large single or multiple core CPU, use 4-5 cubic millimeters, which is approx. a raw grain of white rice.

Spread the thermal paste using the thin edge of a credit card or a single-edge razor blade as an application tool. You can use whatever tool you desire as long as it is clean and gives you control over the application thickness and area.

A flatter surface would require a thinner layer of thermal paste. Processors directly from the manufacturer sometimes have surface irregularities that will need about 0.003″ to 0.005″ of thickness to fill the microscopic gaps and dents. This is equal to about one sheet of standard weight paper. A properly spread thermal pate would have a translucent haze.

Don’t spread the line to dissipate the thermal paste after using the methods above, except for the surface spread method. Instead, gently place your heatsink on the plate and apply a little pressure. This would make sure the paste spreads evenly, with no bubbles underneath. Then, twist the heatsink sideways about one or two degrees to properly apply the paste. Note that some heatsinks can’t be rotated once attached.
Once you’re done, turn ON your computer to see how well it functions.

Read also: How Long Does A Gaming PC Last?

Do you need thermal paste for water cooling?

As long as you have water touching the CPU base, there is no need to use a thermal paste. However, if not, it is highly recommended that you use one.

Yes. The AMD Ryzen 5 3600 is equipped with the Wraith Stealth cooling system.

Although most are insulated, they can be capacitive. For example, the Arctic Silver 5 thermal paste should be kept away from any electrical leads, traces, or pins because it is slightly capacitive.

Yes, it is pretty toxic. Do not put it in your mouth and keep it away from children and pets. Wear gloves while handling it and if it comes in contact with your skin, wash it off with liquid detergent instead of regular toilet soap.

Do CPUs come with thermal paste?

Yes. But manufacturers’ thermal pastes are usually inferior in quality, so it would be much better to get the market standard yourself.

So far, Arctic Cooling MX-2 and Cool Laboratory Liquid Metal Pro are the most popular on the market. Arctic Silver is even more efficient but is more expensive than the others.

Where should thermal paste go when installing a processor?

On the base of the CPU plate.

How to tell if thermal paste needs replacing?

When your computer starts to overheat rapidly, that is a sign that your thermal paste needs to be changed.

How often should thermal paste be changed?

Every two to five years.

How much thermal paste do you need?

You need about the size of a single or two grains of uncooked rice, depending on the area of your processor.

Does thermal paste expire, and how long does it last?

How long does thermal paste in PS4 last?

The thermal paste in the PS4 consoles lasts between 4 to 5 years.