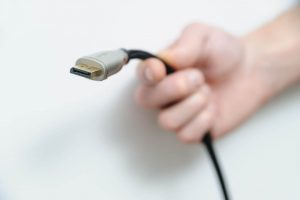 An HDMI to DisplayPort adapter is used to connect HDMI devices like laptops, PS3, Xbox, DVD player, etc. to DisplayPort monitors directly. You might do this when gaming, working, or watching a movie, usually for the bigger screen, increased productivity, and better graphics.

There are probably different reasons why you want to make this conversion and when it doesn’t work, the frustration that follows is understandable. Converting HDMI signal to DisplayPort signal requires the use of an active adapter, an HDMI to DisplayPort adapter, or cable.

Why Is Your “Hdmi To Displayport Not Working”?

Here are other reasons why you might be facing the “HDMI to DisplayPort not working” issue:

Read also: HDMI Port Not Working on Laptop – How to Fix

Your HDMI to DisplayPort not working could also be a result of a damaged adapter or port. The adapter or port might become damaged and then stop working. This damage could be caused by a variety of things, from water damage to manhandling, and wear and tear, especially when you are a mobile user and the adapter is disconnected and reconnected frequently.

Read also: What to Do If Your Laptop Won’t Connect To TV HDMI on Windows 10

How to Fix HDMI to DisplayPort Not Working

One other fix you might try for the “HDMI to DisplayPort not working” issue is troubleshooting the adapter. Try plugging the adapter into another device – if you have access to one. Ensure it is properly connected and not loose, if it works then you might be dealing with a faulty port. Otherwise, you should check the adapter. Some adapters are not compatible with some devices. So it could be that the adapter is not compatible or that it is damaged. Either way, you would need to get a new adapter, one that works properly and is compatible with your devices.

Another thing you should try to fix the “HDMI to DisplayPort not working” issue is disconnecting all connections and reconnecting them. This can also be seen as a reset, sometimes just turning it OFF and ON again might do the trick. To do this:

You could also try to free up your device when dealing with the “HDMI to DisplayPort not working” issue. Do this by disconnecting all other cables that you aren’t using that are connected to the USB ports on your device. The problem could be that the device is getting too many input signals.

In this article, we’ve talked about some of the causes and best fixes for the “HDMI to DisplayPort not working” issue. If you are facing this issue, and you have tried out the fixes highlighted, then you might’ve solved the issue already. If you haven’t, then you might be dealing with a more complex issue. Getting a technician to check out your ports or getting a replacement adapter might help you out.