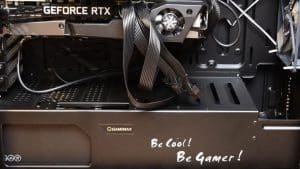 One of the most frequently asked questions by PC gamers over the years is, “does FreeSync work with Nvidia?”

The good news is you can now use Nvidia’s G-Sync technology with any display, including AMD FreeSync monitors. You simply have to go to the Nvidia Control Panel and make the necessary settings. This process takes less than 5 minutes.

This way, you will enjoy an adaptive synchronization between the graphics card and the monitor you use, improving the performance of your gaming PC.

So, in the rest of the article, I’ll explain to you exactly how the technology works, which FreeSync monitors are compatible with G-Sync, among others.

What You Need to Know Before Enabling FreeSync With Nvidia

Now you can enjoy FreeSync with Nvidia graphics cards. You simply have to install the latest drivers from the official website. They come with several features, including the possibility of using FreeSync synchronization.

But like many things in life, this has its drawbacks!

The driver will notify you if the monitor has not been certified by NVIDIA. In addition, the Nvidia Control Panel itself will inform you that the changes made are made at your own risk.

You may experience image problems such as excessive flickering or black screens if you enable it.

In practice, you can be in the middle of a game when the synchronization fails, and the images can show lag and other errors.

That’s all because Nvidia’s VSync isn’t compatible with just any monitor. So if you want better synchronization between graphics card and display, you need the monitor to work directly with Nvidia G-Sync technology.

Also, before proceeding, keep in mind that this task is done with Nvidia 417.71 drivers or later; you can download them on their official page.

Likewise, we recommend that you connect the monitor through DisplayPort because, with HDMI, it sometimes presents incompatibility issues.

Remember that this compatibility between G-Sync and FreeSync will only be activated if you have an NVIDIA GeForce graphics card from the GTX 1000 or RTX 2000 series mounted on your computer.

If, unfortunately, your graphics card is older, then this option will not appear within the NVIDIA Control Panel. As a result, until vertical sync issues are resolved, some video games will have black, incomplete, or distorted images. In this case, the only way to activate FreeSync with any NVIDIA graphics card would be the one discovered several months ago by users, but it involved having an AMD Ryzen APU to activate it.

How to Enable FreeSync with Nvidia

FreeSync Monitors That Are Compatible With G-Sync – A List

This year, Nvidia has a total of 204 entries in its “G-Sync Compatible” list. But these models have recently been added:

Unlike FreeSync and “Variable Refresh Rate” (VRR), which works via HDMI, G-Sync compatibility requires DisplayPort in most cases. Exceptions are LG OLED TVs from 2019, which can be addressed via HDMI.

After a test of initially over 400 screens in early 2019, only twelve screens were able to meet the requirements for a “G-Sync Compatible” seal.

According to Nvidia, around 300 image quality tests are carried out and evaluated. But the number of certified monitors has been growing steadily since then.

At the end of May (2019), Nvidia revealed the number of monitors tested was over 500 and revealed why so few screens received the seal. Image quality and refresh rate range are crucial.

G-Sync Ultimate does far more to your gaming experience than what you get on a FreeSync Premium Pro monitor from a purely technical perspective. FreeSync is prone to some screen artifacts like ghosting.

Still, there are many good FreeSync monitors out there, but unfortunately, many are just a gamble. Some fall short in terms of image quality, while others have a variable refresh rate range that is too narrow. You will “lose” the advantages of FreeSync if your graphics card frames are not in this range. The most significant advantage of FreeSync Premium Pro is the lower price.

On the other hand, G-Sync Ultimate is expensive but has premium performance. So you will be simply paying for performance and convenience.

The b biggest benefit of G-Sync is the consistency and high-quality gaming experience. Every G-Sync monitor has to go through a stringent testing process before it can wear the badge.

Yes, Freesync works with Nvidia RTX 2060. While announcing the Nvidia RTX 2060 in the middle of CES 2019, Nvidia confirmed that its graphics would be compatible with AMD FreeSync technology. So you can enable the G-Sync feature on your monitor if you have a Turing-based graphics card.

The Turing architecture, among other advantages, offers more power and the possibility of calculating ray tracing and using artificial intelligence to eliminate the jaggies – sawtooth effects – in video games without consuming many resources.

Yes, you can use Freesync monitors with any Nvidia GPU. Although they belong to rival companies, Nvidia’s GPUs have been compatible with AMD’s FreeSync monitor technology for some years now. In addition, Nvidia and AMD have developed a solution to synchronizing the respective frame rates using a permanently installed chip in the monitor or corresponding software to prevent screen tearing, jerking, or other unsightly artifacts.

FAQ 4# Does FreeSync work with HDMI?

The FreeSync technology has always supported HDMI, even before HDMI 2.1. This is unlike G-Sync, which requires a connection to an Nvidia graphics card compatible system to work with HDMI.

Yes, FreeSync works with Nvidia GTX 1650, as announced by Nvidia at the CES 2019. When Nvidia first released its long-awaited NVIDIA GeForce 417.71 drivers in 2019, they presented a novelty that many users had been demanding from the company for years: the compatibility of AMD FreeSync VRR technology with NVIDIA graphics cards.

To understand the AMD FreeSync and Nvidia G-Sync technology, one must first understand how graphics are rendered in games.

The respective graphics card and monitor are critical in game rendering.

The graphics card outputs several images per second: the so-called frames per second (FPS). The more FPS you have, the smoother the game appears to the human eye.

The monitor updates these individual images at a certain interval: the so-called refresh rate specified in Hertz (Hz). Therefore, a screen with 60 Hz can theoretically work with a maximum of 60 FPS.

The real problem, however, is that the refresh rate of the monitor is fixed, while the FPS output by the graphics card fluctuates –  depending on what’s happening on the screen.

Intense effects put much more strain on the graphics card than just simple displays, which means correspondingly lower FPS – and vice versa. When ray tracing is activated, even high-end graphics cards like to work up a sweat!

If the FPS is now significantly higher than the monitor’s refresh rate, screen tearing can occur. In this case, there are too many images, and overlap occurs.

On the other hand, if the FPS is lower, it starts to jerk because the graphics card can’t keep up and reloads double images from the graphics buffer to compensate for the difference in the monitor.

This is where G-Sync and FreeSync come into play. They override the monitor’s fixed refresh rate. In addition, the monitor and graphics card can communicate directly with each other, which means that the respective frame rates are dynamically adjusted.

Read also: What Is C Drive in Computer?

As its name suggests, FreeSync means free synchronization. It is a technology that allows the graphics card to have correct synchronization with the monitor. As a result, it ensures the images of applications or video games are shown with greater precision.

To have complete control over when to send an image to the screen, it is important to control the start and end of the vertical sync (v-sync) on each frame.

In other words, the goal of FreeSync is to give the GPU complete control of when vertical sync starts.

FreeSync is the trademark name given to VESA DisplayPort Adaptive-Sync on AMD graphics cards.

The VESA standard is very popular because of its effectiveness and low price. Consequently, most manufacturers now make monitors with this sync technology.

What is Nvidia G-Sync?

Gsync is a hardware-based solution for PCs developed by Nvidia. It aims to eliminate screen tearing and frame rate problems in games.

Gsync is permanently coupled or built into the monitor. It removes the fixed refresh rate of the display and ensures that the monitor can communicate directly with the graphics card.

It induces the graphics card to wait until the monitor’s refresh cycle is complete before constructing the image.

The effect of this can be a smoother gaming experience, and the FPS is also limited at the upper end, so the frame rate is ideally consistent and constant.