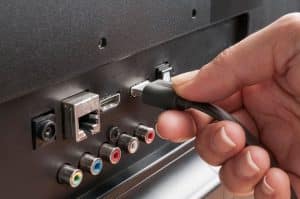 With the various input options available nowadays, it is important to get familiar with the inputs on your PC and other devices. Knowing what inputs you have will also let you know what cables you should get, what they can do, and how to connect them.

For instance, when it comes to audio and video, what cables can or cannot support them? Does DisplayPort, DVI, HDMI & VGA carry audio? Do they carry video too? Which should you choose, and how should you connect them? These are all critical questions that can save one from getting the wrong cable.

If you’re curious about which cable does what, this article will give the best explanation.

DVI typically carries video signals, but it can also carry audio depending on the type of DVI cable and the connection needed. To achieve audio with a DVI cable, the best option is to use an HDMI-to-DVI cable, where the source provides HDMI support, and there is an allowance of HDMI within the DVI.

In the case of an old video card, you can get audio using a DVI-d-to-HDMI converter cable. Although, most HDMI cables will not work with this due to the configuration requirements. Suppose your graphics card does not support DVI audio or you don’t have the DVI-d version. In that case, you can use a DVI-to-HDMI adapter with an active adapter or external power source. This way, you can use a DVI-I-to-HDMI active adapter with an outlet for external power.

There are three types of DVI cables, one of which carries audio without any help. The DVI-I cable transmits integrated analog and digital signals and has four extra pins to carry both video and audio. The DVI-D and DVI-A cables typically carry video and might carry audio with some external help.

Yes, DisplayPort carries audio, video, and some forms of data. If you have a system compatible with DisplayPort, you can output audio and video. DisplayPort is similar to HDMI and comes with advanced features like Multi-Stream Transport which allows you to output to multiple displays using a daisy-chain over DisplayPort or DisplayPort MST splitter.

Unlike the DVI cable that requires external help or special adapters, a DisplayPort cable is simply plug-and-play. However, if you cannot get audio with DisplayPort, you could check the monitor’s refresh rate. For example, if it is a 144 Hz monitor, you would need to reduce the refresh rate to get audio, or you can switch the default audio device back to your monitor in the control panel of your PC.

If your device supports audio output, you can use a compatible DisplayPort cable and a supported display with built-in speakers or headphone output. You can also connect a DisplayPort output to a supported HDMI device using a DisplayPort-to-HDMI adapter – it can be active or passive.

No, VGA does not carry audio – but much like DVI, it can, depending on the connection. VGA cables support video signals only unless it comes with the attached VGA audio cable or you include a separate audio cable plugged into the audio out/headphone port of the source and receiver’s audio-in port.

You can use an HDMI-to-VGA connection if you don’t have the VGA audio cable or an additional audio cable. You can also use a VGA-to-HDMI adapter box to convert the VGA’s analog to a digital signal or a DisplayPort cable connected to both source and receiver.

Yes, HDMI carries audio and video, much like the DisplayPort cable. However, the HDMI cable is more famous for its video quality than audio. HDMI provides theatre-quality audio and high-resolution video, supporting Dolby TrueHD and DTS-HD as well as 1080p and 1080p 3D with a single cable.

It is important to note that some devices do not support audio via an HDMI cable but with an audio cable. Check out the HDMI ports on your devices to know what kind of cable to get and ensure your device supports HDMI video and audio

Does DisplayPort To HDMI Carry Audio?

You should become familiar with the ports on your devices to know what cable to get and how to establish the connection.

You can also use a DVI-d-to-HDMI adapter, a DVI-to-HDMI adapter with an active adapter or external power source, or an audio connection from the audio output jack of the source to the audio input on the receiver to get audio with DVI. See ‘DOES DVI CARRY AUDIO’ above for more information.

There are so many ports and cables with different signals and types. This might be confusing if you’re not tech-savvy or familiar with these cables. But after reading this article, you would no longer wonder if DisplayPort, DVI, HDMI & VGA carry audio.