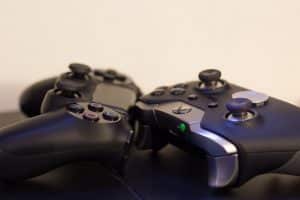 In the 40+ years that they’ve been around, controllers have changed quite a bit. Looking at all the clunky, box-like iterations of the past, we can see that there have been all sorts of changes made.

However, after years of innovation and over 1 million video games later, most of you may have noticed that, now, all controllers look more or less the same.

Does that mean that the controller design has peaked? There may be some additions here and there, but there haven’t been any really groundbreaking ideas introduced in a long while.

As it turns out, “perfect” isn’t right around the corner — and it may never be.

Logically, making the device more ergonomic has always been an important part of the design process. This is one of the main reasons behind the controllers getting smaller and more curved.

Nintendo’s D-pad, designed in 1982, is a great example of steps taken to make controllers more wieldy overall. The gist of its design still echoes in today’s controllers, especially the overall flat shape one can easily hold in both hands.

And comfort is also why the massive “Duke controller” once touted by Xbox suffered a lot of criticism. The hate was due to it being so large, making it hard to use, especially for people with smaller hands.

However, comfort is hardly the only thing responsible for every new addition or omission from the standard design. One of the main contributors in that sense is the good old advancement of hardware and software.

These newer games progressively included more features that required more input from the player (moving in a 3D environment, more buttons for more actions, and similar). This meant that the controllers needed to provide players with a quick and easy way to enable these actions.

So, the controller had to accommodate for more flexibility and functionality while still keeping a high level of comfort and intuitive use. As you can imagine, this is quite the balancing act.

Luckily, the gaming industry has a lot of professionals that are more than capable of managing that. That’s why we have all the wonderful controllers we enjoy today. And it’s also why they tend to look so much alike: they’re the aggregate of so many great innovations.

What kinds of innovation? To be sure, there are tons of breakthroughs that quickly became the norm, but a few deserve a special mention.

The handles were actually something that almost never came to be. Sony’s now-legendary Dualshock was initially turned down by the management because they really disliked the protruding gripping surfaces.

Luckily, Sony’s president at the time, Norio Ohga, took a liking to the design and overruled the management. He compared it to the controls one would find in an airplane (since he was also a pilot, among other things).

The first joystick was introduced way back in 1976, with the Prinztronic/Acetronic/Interton series. It allowed for more refined movements of the cursor (and, eventually, the player character in later games). It could also provide varying movement speeds.

The idea took off big time, with a few tweaks here and there. For instance, the Vectrex gaming system presented a centering stick, meaning that it always bounced back in place after moving it. The thumbstick, a minimized version of the joystick, eventually became a staple of controller design.

Looking for a PS4 controller with paddles? Here are the best.

Shoulder buttons, having been around since as far back as the SNES, were quick to spread due to their convenience. They implied not only more buttons for more control capabilities but also more functionality by combining simultaneous button presses.

We can go over many more tweaks, but the gist is that all of these solutions found their way to the vast majority of controllers.

So, is what we have now the pinnacle of controller design? Have we hit a roadblock?

It seems that the compromise between comfort and control potential that led to the standard design of today has gone dry — at least in its current iteration. The Dualshock shape has undergone so many innovations, that there isn’t all that much that can be added.

Granted, some improvements do show a lot of promise. Underbuttons, as seen on the Xbox One Elite controller, are a great way to make use of the middle and ring fingers, which traditionally do little more than hold the device in place.

But in the end, the Dualshock concept is more or less as good as it can be for gaming purposes. There probably won’t be any more groundbreaking changes without making a near-complete departure from the well-known pattern.

The bulk of innovation comes from the professional gaming community, where the tiniest solutions that save milliseconds mean the world of difference. It’s where the claw technique became so widespread, for example. And it’s these communities that are responsible for the most out-there ideas, like the B0xx, fine-tuned for Super Smash Bros. Melee.

The next best thing in gaming controllers will most likely come out of the competitive niche. And like the brilliant design choices before, it will probably become the norm straight away.