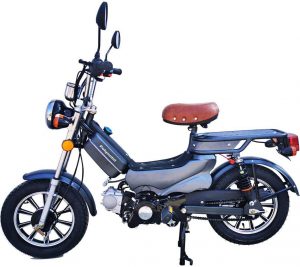 This article, rather than focusing on individual mopeds, focuses on social media groups and communities of people looking to put their own mopeds up for sale, and you’re sure to find a few deals that would be worth it for you.

The subreddit named r/moped is probably the first place to look in your search for used mopeds for sale. Since you’d rarely find these at any retailers, your best bet will be communities of moped enthusiasts where we’ve seen people put up their mopeds for sale. You will surely be able to get high-quality moped builds from users who have mostly taken good care of their mopeds. For the price, we have seen people put up mopeds for sale under $300 while we have seen some really expensive moped deals pulled off on the platform.

If you live in the New York area, the NYC mopeds is a group you could check out for sales of mopeds by owners near you. On a quick look, we found a couple of mopeds on sale, and these range from gas to electric mopeds. For those looking to repair their own mopeds, you can easily buy moped parts from other users or sellers in the NYC area.

While you might not find plenty of mopeds on sale here compared to NYC mopeds, this marketplace deals more in the trading and sales of moped parts. We occasionally see users putting mopeds on sales, some being under $300, with others going as high as $1000. Most of the sellers are based in the United States, so purchasing either used mopeds or moped spare parts isn’t too much of a hassle. I should mention that if you choose to use any of these communities, rather than just waiting until mopeds are posted, you can make requests for mopeds, clearly stating your budget.

One of the interesting things about this community is that you have a lot more people posting things for sale than actual buyers. The Leicester mopeds is a community, and users generally post bikes, mopeds, parts, and safety equipment for sale. If you are in the UK, and wouldn’t mind getting somewhere close to look for a cheap moped, then you can give this a look.

Another very large community where you can easily buy and put mopeds up for sale without stress. The community has a stronger base here in the United States, hence many of the mopeds being put on sale are actually by users here in the United States. Depending on your distance from the seller, you might be able to personally check the mopeds and see if you’d like to close the deal. The Mopeds on sale are in different price ranges, but you will find a good number of them that are either under $300 or within that range.