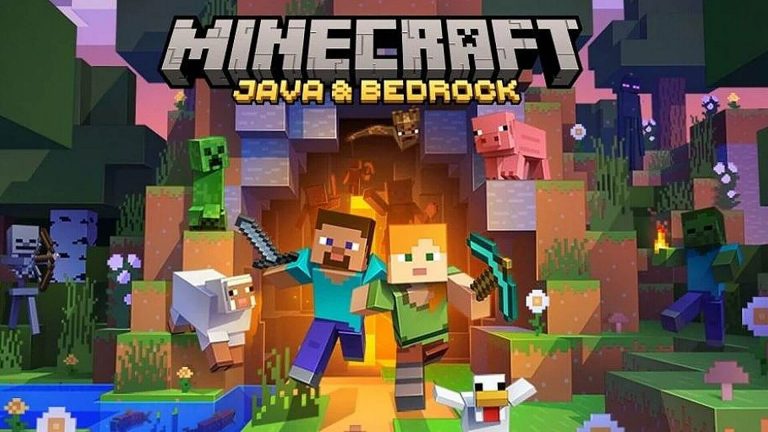 In the past, you’ve probably asked, “can bedrock and java play together?,” or you’ve already made that attempt. You’ve perhaps wondered why this or that farm does not work on Xbox. What is the difference between Minecraft: Java Edition and Minecraft on your computer? Why can’t I cross-play with my friend? All these can be summed up in one sentence: Minecraft has two different editions!

Minecraft is one game with two versions: Java and Bedrock. From its early days, players could not officially cross-play each other from both versions, i.e., from Java to Bedrock. Only an account that purchased Java was able to play Bedrock. But can you now play a Bedrock friend as a Java player? I’ll tell you what’s possible and what’s not in this article.

Can Bedrock and Java play together?

The good news is, starting from June 7, 2022, both editions of Minecraft have been merged, and players can now cross-play as users have both games in one purchase.

Java, the original Minecraft version, used to be exclusive to PCs, but now they’ve all been merged. However, both remain separate games with distinctive features, according to Minecraft’s blog post announcing the merger.

However, for game owners who got theirs before this new development, the possibility of a cross-play doesn’t exclude them. Players with the Bedrock or Java edition will get the edition they don’t currently have for FREE!

So there’s no need to use a game emulator or development environment, find the game and engine source code, and use a shared library or APIs like some before this development.

How do I get the other Minecraft version I don’t have?

According to Minecraft, those who purchased Minecraft before June 7 can automatically claim the one they don’t currently have. You don’t need to do anything. The other game they don’t have will show up, and they can cross-play as much as they want.

How to play Bedrock on PC

Those who have Minecraft Bedrock and want to play on PC can download and install the latest version of Minecraft Launcher, from which you can successfully launch Minecraft and play Bedrock. However, you will need a PC with Windows 10/11 to succeed.

As I mentioned earlier, Java is the original edition built for PCs. But it’s easier, too, for those who want to make Bedrock work for their PCs with a little official workaround, as you can see!

Minecraft Java and Bedrock – Everything you need to know

Indeed, there are two, or rather four, distinct versions of Minecraft: the Java, Bedrock, Education, and China editions. In the rest of this article, we will focus on the first two, but here is a brief description of these different editions of our favorite game.

Minecraft: Java Edition, or the Java Version, is the first version of Minecraft released. Initially called “Cave Game,” then “Minecraft,” they changed the name in 2017 following the creation of the Bedrock Version.

It is available only on Microsoft Windows, macOS, and Linux and requires slightly higher performance than other versions. Being the original version, it is more common on the Internet.

Its multiplayer system is based on self-hosted servers by hosts not affiliated with Mojang Studios or Realms. It also offers great technical flexibility for advanced players thanks to the addition of data packs, and the accessibility of the code, allowing the development of mods.

Minecraft (Bedrock Edition), the Bedrock Version, or just Minecraft, is also one of the most purchased and played versions of Minecraft. It is available on Windows 10 and 11, iOS, iPadOS, Android, Fire OS, Xbox One, Nintendo Switch, PlayStation 4, and Amazon Fire TV. It is almost identical to Java but less suitable for more technical players. Its multiplayer system emphasizes free online play with friends. But it also has online servers, a paid multiplayer system called Realms Plus maintained by Mojang, and a server system.

Minecraft: Education Edition, or the Educational Version, is a version of Minecraft derived from the Bedrock Version. But it is optimized for classroom use and based on a subscription system for the school, class, or camp using it.

It comes with many educational elements, especially in code and chemistry.

It runs on Windows 10 and 11, macOS, Chrome OS, and iPadOS. This release did not, however, receive Caves & Cliffs: Part 2.

Minecraft China is a version of Minecraft available only in China. It is free but less comprehensive than the other three versions above and highly moderated by the government.

There are three Legacy versions of Minecraft that no longer receive updates. They are:

Read also: Can Xbox One Play with Xbox 360 Online?

What Are the Differences Between Java and Bedrock Versions?

As stated above, this article will focus only on Java and Bedrock versions. These two versions have several minor differences, which can change how the game works in many aspects. I also need to remind you that there is no best or competition between these two versions, which have followed two different development paths.

First, we’ll focus on multiplayer. In Java, multiplayer uses a server or an underdeveloped LAN system. These servers require a host. It can either be local, which can reduce performance, or online, which implies hosting services that are often paid for.

In contrast, Bedrock multiplayer is mostly free-to-play. This makes it easier to play with better performance. However, this service only allows the game if the host player of the game is connected. Realms and server services are nevertheless present, less developed than their Java counterpart.

The redstone of the Java and Bedrock versions is broadly similar, but it has two major differences: pistons and near-connectivity.

First are the pistons. The Bedrock Version is rightly criticized a lot because of these. Indeed, the pistons can only extend at certain precise game ticks, distorting a large part of the systems controlling the duration. This also results in the absence of the One-tick Pulse mechanics of the sticky pistons.

Next, let’s focus on Quasi-Connectivity. This Java Version bug connects redstone across blocks. It is not present in Bedrock but is not necessarily a plus. Once you know how to handle it, many new possibilities are available. It has been confirmed that this bug will not be fixed in the Java Version or added to the Bedrock Version.

The Java Version and Bedrock commands are very different. First, the syntax of commands like /scoreboard, /execute, or /effect can vary.

Then, the Bedrock Version has neither commands related to teams nor options for modifying the Named Binary Tag (NBT) of game elements.

Finally, the Bedrock Version also has exclusive commands very useful for mapping, such as /ride, /camerashake, or even /event.

The combat mechanics of the Bedrock Version correspond to those of the Java Version before the first Combat Update, i.e., without the weapon cooldown.

However, Bedrock mobs like the Wither, Ghasts, and Raiders are far more powerful than their Java Version cousins, making survival a little more difficult despite its combat shortcomings.

It was expected that the Bedrock Version would fully catch up with the Java Version in this area in Combat Update 2, which will be released simultaneously on both versions. However, an unofficial add-on now makes up for this delay.

These two features are exclusive to the Java Version. However, they are both available via an add-on in the Bedrock Version.

Hardcore is a one-death difficulty. However, the debug screen provides much information about the game in progress.

The Bedrock Version is launched directly through the application, while the Java Version uses the Minecraft Launcher. The Launcher allows you to choose the game update, while the Bedrock Version forces these players to the latest version. This is due to the inability of multiple platforms to use a launcher.

Java Version skins are created and loaded manually online or via the Launcher. For example, in the Bedrock Version, the player can create one in-game via the character creator.

The Java Version also has more success than the Bedrock Version. However, the biggest difference is that Java achievements are globally registered. Therefore, both have their respective advantages and disadvantages.

The Java Version is modelable in three ways. First, Resource Packs change the game’s textures, models, and sounds, without changing the mechanics.

Then, Data Packs change how the game works by adding blocks, biomes, structures, etc. Like resource packs, they are officially supported by Mojang Studios.

Finally, the last way is using Mod Packs or modification packs. These consist of modifying the game’s source code and, according to Microsoft, can be removed if deemed to risk corrupting the game. They must be installed and applied via external applications.

On the other hand, the Bedrock Version does not have these mods, the game being developed in part by Xbox Gaming Studios, which is more strict in the matter. A more advanced version of the Data Packs is in development to compensate for this. These files, called add-ons, are downloaded from .mcaddon directly into the game.

Add-ons are a combination of Bedrock Resource Packs and Behavior Packs.

These change the functioning of certain game elements, objects, and entities. These are individually downloadable as a .mcpack.

Finally, the update system is different. In the Java Version, an update follows three development stages, some of which can be skipped. First, Snapshots prepare updates and add new stuff.

Then, the Pre-releases tweak the update. Finally, the Release Candidates verify that the update is ready for release. The player can, at any time, choose the version they’re playing.

In the Bedrock version, the player can only play one version, the latest one. RA players on Windows 10, Xbox One, or Android must join the beta program through their support to play a beta.

A snapshot is released weekly about every Wednesday, and a beta every Thursday.

Read also: How to Connect To 2b2t on Minecraft

There you have roughly the differences between the two main versions of Minecraft. Now, which is the best? The answer is simple: it all depends on the player. We saw above that each version has its advantages and disadvantages.

Don’t forget that you can now play Minecraft as a Bedrock owner with a Java owner since all users have both editions. Also, some launchers can help you easily play, for example, Bedrock on your PC.