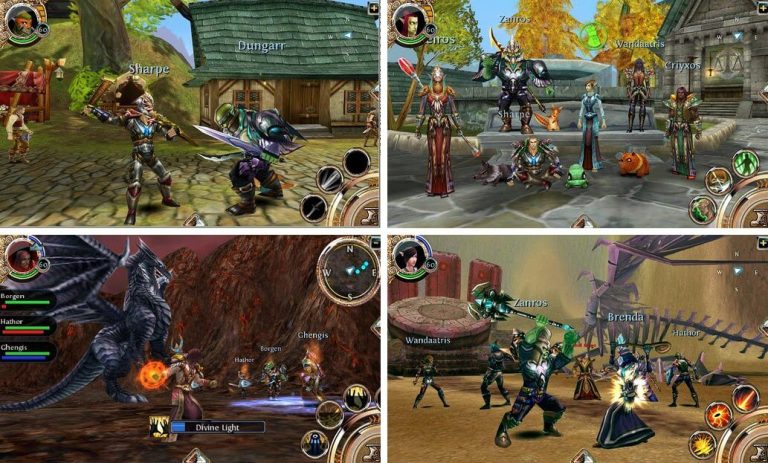 Turn-based RPGs have become very popular among gamers. In turn-based role-playing games, each team takes turn and command their characters to take specific actions to destroy the enemy. There are tons of turn-based RPGs available online -both free and paid. However, I’ll be giving you a list of the best turn-based RPG Games for Android and iOS users. Take it from me, these are the best of the best.

Have you ever dreamt of being a hero? Here’s your chance to become one. As a player, you control the main character Frain who’s on a mission to save the world from a scientist’s dreadful mistake. He meets two heroines Bell and Aulin who support him through his journey. As in most games, you earn points by defeating enemies and completing quests and these points can be used to power up your skills.

You get to interact with a few villagers and even loot buildings without anyone objecting. The game is free but you must pay for premium items with cash. Lucky for you, you can complete the game without premium items!

2. KNIGHTS OF PEN AND PAPER – Best Turn Based RPG for Android Tablet

A lot of people claim that this game was created in a similar style to Dungeon and Dragons. Asides from controlling their characters, players can also control the Dungeon Master, hence they decide which battles to fight. You can make your choice between mages and knights. If you like being a daredevil, you can make your fights more challenging by taking on a group of monsters – just so you’d know, you’ll be handsomely rewarded for this. Knights of Paper and Pen is undoubtedly one of the best turn-based RPG for Android and iOS.

Although developed in the 1990s, this game seems to tickle the fancy of present-day gamers. It’s a multiplayer turn-based RPG for Android and iOS that allows a maximum of 8 players and a minimum of 2 players. The character is divided into four categories, Mages, Priest, Nonhuman, and Warlords. There are about 20 distinct characters and it’s possible to have no nonhuman in a game. Although this game has its flaws, gamers are still very much addicted to it. So you better join the league!

Developed by Square Enix, this game is a tactical role-playing game that has become really popular amongst gamers. The story focuses on Ramza Beouvle who finds himself mixed up in the Lion War, a complicated military conflict. In the game, two opposing teams get to battle for the throne. And if you successfully perform certain actions, you’ll acquire Job points and Experience Points. Enjoy the medieval-based fantasy world of Final Fantasy Tactics.

In this game, a group of travelers arrive at Neo Paleo intending to go to the heavens, a planet called Marble Blue. Each character has specific reasons for embarking on the journey to Marble Blue. The game has 5 characters. One of the characters seeks Paradise on that planet while another seeks her lost father. As you progress, you get to discover the reality of Paradise and the advent of Marble Blue. The story, gameplay, and visuals of this game are enough proof that it’s one of the best turn-based RPG for Android and iOS.

Developed and published by Harebrained scheme, Shadow Returns is a turn-based role-playing game for Android and iOS devices. There are six categories of characters namely; Mages, Rigger, Samurai, Shaman, Physical Adept, and Decker. You get to choose the appearance and gender of your character. Each character can use a maximum of 3 weapons. Characters’ movement is based on the player’s available Action points. If you’re looking for adventure, you better get your hands on this super addictive game.

Kingturn is the reincarnation of an old game Knighturn. Trust me, this game is pretty cool but I should warn you about its not-so-exciting graphics. The latter game is less difficult than the former, characters have been adjusted and a few advancements have been made. Your goal is simple; your team has to overrun the opposing team’s base and kill all the members.

Just like most RPGs, you can equip your character with more weapons and skills. You can gather some gold which you can use to hire mercenary, purchase more equipment. While the graphics are nothing to write home about, the music will definitely cover up for it. Have fun with it and don’t forget to thank me because you’ll be grateful you took my advice!

There is no doubt that the aforementioned games are some of the best turn-based RPGs for android and iOS. They have all received positive reviews from critics and gamers. Although there are a few negative reviews – what’s a product without negative reviews, right?