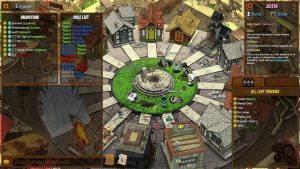 Multiplayer games can be so interesting. If you ask me, I’d say they’re way cooler than single-player games. Town of Salem is one awesome multiplayer game that’s to die for. This game can accommodate 7 to 15 players. If you’re a good detective or liar then you would love the game. The game tests the ability of players to detect lies or deceit and the ability to lie without getting caught.

If you’re already excited about the Town of Salem, you should stick around a bit longer because I’ve prepared a list of the best online multiplayer games like Town of Salem for you.

Just like the Town of Salem, this one’s a game of psychology. The three basic characters are Mafia, Villager, and Neutral. As a villager, you’re one of the good guys so your job is to detect those against the village i.e mafia (the bad guys). If you happen to be a Mafia, you and the other members of the Mafia will meet secretly to decide who’s going to be killed. So as a villager, you must know how to detect lies and like a mafia, you must know how to lie convincingly. Have fun playing!

Inspired by medieval politics, Throne of Lies is a game of mischief and social deduction. Members of the Blue Dragon group must make maximum use of their detective skills and fish out the traitors amongst them. As the game progresses, the traitors amongst you will try to lure members of your faction to their side and kill everyone who defies them. Trust me when I say Throne of Lies is one of the best online multiplayer games like Town of Salem.

A fan of horror movies? You’re going to love this one. This used to be a punishment for those who have violated the laws of the Pagan religion. To play, all you need is a piece of paper, a writing material, a candle, salt, a lighter or matches, a drop of your blood, and a wooden door – the same thing applies to your group members.

You just have to follow the instructions explicitly to win the game. After letting the Midnight man in, you’ll have to keep lurking around your dark house with a lit candle till 3:33 am while avoiding him. If your candle goes out, light it back within 10 seconds or make a circle of salt around you and remain there till 3:33 am. Indeed, this game is for thrill-seekers.

Plazma Burst is another online multiplayer game like Town of Salem, but in this case, it’s a 2D online shooting game. It has both single-player and multiplayer modes. The setting is a post-apocalyptic realm where an alien race called the Usurpation force has taken over planet earth. As a result, humans have to battle this mysterious force and take back their planet. There are 3 major enemies factions you’ll have to fight, Usurpations, Androids, and Civil Security. Feel free to explore all the game modes, characters, and their exciting abilities and weapons.

Judging by the name ‘Camp Cadaver‘, you would know it has something to do with a murder in a camp… that’s exactly what it’s all about. After the series of deaths recorded in the camp, it’s time for the camp to reopen but not everyone has good intentions. Every player has different roles and unique abilities. They must use their special skills to detect the players with evil intentions or to kill the good players – depending on their roles.

6. ONE NIGHT WEREWOLF – Best Games like Town of Salem for Android and iOS

One Night Werewolf is a multiplayer game that can accommodate between 3 and 10 players. You either take the role of a Villager, Werewolf, or any special character such as the helpful seer or the tricky troublemaker. Each character has a special ability.

In just one morning, the villagers will decide who is a werewolf amongst them, then try to kill the Werewolf at night. Once you manage to kill one Werewolf, you win the game. Of all the games on this list of online multiplayer games like Town of Salem, this one seems to be the quickest. This means you’ll have enough time to play it over and over again!

Garry’s Mod has two game modes and Trouble in Terrorists Town (TTT) is one of them. You are either a Detective, Traitor, or Innocent. To win the game, your team has to kill everyone on the other teams without any of your members getting killed. Traitors and detectives have shops where they can purchase items.

There are 3 rounds in the game; Pre-round, Mid-round, and End-round. I have to warn you to set apart enough time before trying this game because it is addictive! There you have it, amazing online multiplayer games like Town of Salem! By the time you’re done trying these games out, you are sure to fall in love with at least one of them.