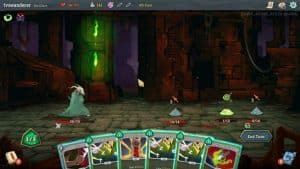 Published by Humble Bundle, Slay the Spire is a pretty popular roguelike game. In my opinion, that’s probably because it combines the gameplay of a deck-building card game and a roguelike game. The player has to combat enemies while trying to climb a spire of many floors. The player will have to utilize techniques from deck-building games to build a deck that will be used to complete the climb.

With the little I’ve said about this game, you can tell that it’s one super engaging game! However, no matter how awesome a game is, you may want to try your hands on something new. So here’s a list of games like Slay the Spire for Android mobile devices:

Best Games Like Slay the Spire for Android Devices

1. Dead Cells – Best Games Like Slay the Spire for Android

This one is for the adrenaline junkies who love to keep themselves excited all through the gaming experience. Dead Cells is referred to as a Roguevania, being a combination of roguelike games and Metroidvania games. One of the reasons I like this game is because it uses a permadeath system. This means that players will lose cells, items, and currencies once they die, so you’ve got enough of a challenge.

But enemies may sometimes leave cells after they’ve been defeated and these can be used to acquire extra health potions and other permanent power-up items.

2. Caves – Best Games Like Slay the Spire For Free

Caves is another adventure video game-like Slay the Spire for Android users, but unlike the others, there are puzzles, tricks, and traps. There are a total of seven characters, so you’d have to choose 3 out of them. Each character has its own unique story and personality and if you choose a different character combination, the entire game layout changes. Although there are areas of the game that don’t change regardless of the character, some characters have a special ability that’d help you evade some obstacles.

So if you’re in for some excitement coupled with the adventure, you should give this game a chance.

3. Ascension: Chronicle of the Godslayer – Best Games to Play If You Like Slay the Spire

Now this one’s a combination of fantasy and deck-building. I can assure you that Ascension provides hours of engaging and fascinating gameplay.

Samael, the fallen god has invaded the world of Vigil – which has been isolated for millennia – with his army of monsters, and you are one of the warriors who can fight this threat. As expected, you’d start with the most worthless cards in the game but you’ll have to purchase new cards as you progress, these cards are divided into Heroes and Constructs. What makes this game stand out is that there are monsters you can fight to acquire Honor Tokens – pretty sick, right?

If you’re looking for something different, you should try Hoplite. This game has roguelike gameplay but with a traditional look. As a player, you get to control a legendary Greek militant. You must go from dungeon to dungeon until you die then you’d have to start over.

As you advance from one dungeon level to another, you become stronger but your enemies will also become stronger and more numerous. So each level becomes more challenging than the other. So if you love challenges, Hoplite should be your favorite from this list of games like Slay the Spire for Android.

Built like Nethack, Pathos is a roguelike adventure game. Many would say Nethack is one of the greatest video games ever. But I don’t know about that, that’s totally up to Nethack fans.

As usual, you’d have to pick your character and dungeon before starting. One of your goals is to descend into dungeons until you get to Hell. You simply click on a tile to move in that direction. The complexity of this game may discourage those who are novices in this genre, it’s definitely worth giving a try.

ReversEstory is a 2D roguelike action-packed shooting game. It’s a very exciting game with so many activities and items to collect. You’d find a treasure box in the field where you can collect treasures you find and you can exchange a treasure for items you need.

However, if you die, you’d lose all the progress you made and you’d have to start over. Navigation is quite easy, simply swipe the screen to jump, run, and even fly. Although some may describe it as an unusual game, it’s one of the best games like Slay the Spire for Android.

I just can’t place my finger on the main reason why I enjoy this game (Soda Dungeon 2) so much, must be because there are so many items to collect. I guess I just love collecting stuff – lol. What makes this game different from other roguelike games is that its dungeons are endless, you just have to focus on increasing your score each time you play. Trust me, you’d enjoy the endless run, it’s super exciting!

So I’m pretty sure that with this awesome list of games like Slay the Spire for Android, you now have a whole new list of games to occupy yourself with.