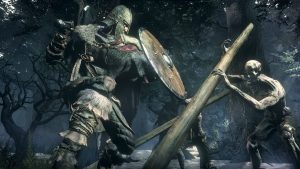 If you love action, intrigue, and fantasy, you better get in here because I’m about to blow your mind with this list of some of the best games like Dark Souls for Android and iOS. As the name implies, the game, Dark souls are in a dark and fantasy setting. You get to combat creatures like ghosts, knights, demons, and dragons.

But I’m pretty sure you’re familiar with Dark souls and you’re probably itching to know its alternatives. So I’ll just cut the chase and get right to it.

Best Games like Dark Souls for Android and iOS

Raid: Shadow Legend is an RPG with a fictional theme. In the game, the world of Tileria has been overthrown by Siroth, a dark lord. As one of the ancient warriors from Telleria, your job is to bring back peace to your territory by defeating Siroth. Players must form an army in deserts, temples, dungeons, and castles. You also get to gather vessels containing the souls of ancient warriors, these vessels are called Shards. The game even has a multiplayer mode so you can invite your friends to play with you.

This is another mind-blowing action-packed role-playing game like Dark souls for Android and iOS. There’s a tutorial at the beginning, just so you don’t get lost in the actual game. At the beginning of the game, you’ll have to select a character out of the four available ones. The available characters are a wizard, assassin, berserker, and a warrior. You can upgrade your character to make him fight better. You’ll upgrade him by equipping him with more weapons and by unlocking new abilities. You can also use the gold you earn to upgrade your character’s abilities and weapons.

As the name implies, it is the 5th member of the Dungeon Hunter series. The similarities between Dungeon Hunter 5 and Dungeon Hunter 4 are the setting, activities such as looting of items, and a few other gameplay techniques. Although it is quite similar to its predecessor, Dungeon Hunter 4, it has a few unique features. Unlike its predecessor, it’s not an open-world game, it involves progressing from one dungeon level to another. Feel free to invite your friends to join in on the excitement. One of its drawbacks is that it requires an internet connection.

Your world has been invaded by evil forces, so you’ll have to battle your way from dungeon to dungeon. It has both single and multiplayer mode and if you choose to go solo, you won’t have to miss out on any of the fun. And if you choose the multiplayer mode, you and your team get to complete tasks, take on bosses and share rewards for completing tasks together. You can customize your character’s skills, let’s not forget the cool items you’ll collect to upgrade your hero.

Its amazing features and engaging gameplay makes it one of the best games like dark souls for Android and iOS.

Vampires are some of the most popular creatures in the world of fantasy, and this game portrays their lifestyle perfectly. You happen to be a resident of a village, Vamp’ Ire which has been attacked by the Witchmaster. Just like others on this list, you’ll have to complete quests and fight battles to upgrade your character and advance in the game. No matter what you do, remember you’re a vampire so stay away from light and garlic!

Just when I thought I was done with my list of games like dark souls for Android and iOS devices, I found another awesome game. A powerful demon wants to conquer the world so no one would have the resources to challenge him. The first attempt was futile so you and some characters (who are real players) have to rise to the challenge and stop him. Its wonderful graphics, intriguing story coupled with the fact that it’s quite easy to understand makes the game an experience to remember.

Developed by Gameloft, Order, and Chaos is a fantasy MMORPG (massively-multiplayer online role-playing game). It can be played from a first-person or a third-person perspective. Just like most role-playing games, there are quests to complete but in this case, there are about 1000 quests to complete. Some quests are directly connected to the story or maybe short quests.

Since your town, Haradon has been destroyed by flood, some areas are still covered with water so you’ll have to visit places like tropical islands, deserts, wastelands, etc. There are so many other fun activities in this game but you can only find out if you get a taste of it.

These action-packed games like dark souls for Android and iOS users are sure to keep you busy for a pretty long time. So you better clear your schedule and make enough time because you’ll definitely spend more time than you planned!