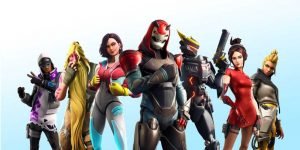 Building games are ideal for exploring your creativity. There are numerous building games on PC but Fortnite seems to stand out. It has become extremely popular among gamers, it is so popular that some famous footballers have admitted to being fans of this game.

Fortnite is a fun-filled game but the human mind is prone to get bored of monotony, so you might want to experience a little change – especially if you’ve played too much Fortnite. So if you are looking for something different and still retain the Fortnite experience, you should stick around as I will be sharing some of the best building games like Fortnite.

What comes to your mind when we talk about building games? If it’s not Fortnite then it must be Minecraft. Minecraft has been into Hunger games for a couple of years. The Hunger Games Minecraft mod has been the best battle royale for a while. This game retains the Battle Royale experience but in this case, players have to build homes for themselves while trying to hunt down other players and remain alive till the end of the game. One thing I love about Minecraft is that it favors the little ones. So whenever you decide to give this a try, your kids can tag along. You may not get the exact Fortnite experience from this game but it’s definitely worth the try.

I think I can say that this game was crafted from Fortnite. Both games are quite similar. The buildings and locations on the map are named just like those in Fortnite. But the difference between these two is that in Creative Destruction, players jump out of a taxi rather than a bus, which is the usual Fortnite style.

One interesting feature of this game is that it offers other gameplay modes and not just the deathmatch mode. You get to play along with 100 other players until one wins. Plus, you have to battle to remain alive amidst extreme weather conditions.

It was released before Fortnite but for some reason, it was fully released in 2018. What I find interesting about Rust is the obstacles in the game. By obstacles, I mean elements that can lead to a player’s death such as attack from other players, hunger, thirst, extreme weather conditions of the wilderness, and even attacks from bears and wolves. But players can seek protection in base buildings. Plus, this game is exclusively a multiplayer game. So why don’t you dive right in and get the fun-filled Rust experience?

If you’re on the lookout for the best building games like Fortnite, then try Roblox. Roblox is very famous amongst gamers. Players can do a face-off with other players in a deathmatch/battle royale, you can join as a restaurant owner or join in a baseball game. The most unique and intriguing feature of this game is that it allows you to build objects, the game realm or world, and even the game itself. Roblox is very similar to Fortnite in so many ways which is what makes it qualified to be a Fortnite alternative.

This one is quite similar to Rust. Players get to play in a wilderness that contains all manners and species of dinosaurs. To flee from this wilderness, players must gather materials for building certain components of a building. But these pieces must be built separately before putting them together. And if specific points are destroyed, buildings can be jeopardized or damaged.

This is one game that lets you build to your satisfaction. It has many worlds and realms. But first, you need to create your home base or cornerstone which you will take from realm to realm. You can enhance your cornerstone with certain resources. The good news is that there are dungeons where you can scavenge for loot. Plus, Trove makes the loot-collecting process a fun experience. Trove is undoubtedly one of the best building games on PC.

No man’s sky helps awaken the inner architect in gamers. What makes it unique is that it’s in inner space. But you’ll need to ensure that your home can support life since space does not support life. You can do this by constructing a signal booster or by simply flying over your planet’s surface with your ship’s scanner. Once you’re done with this, you can commence the construction of your space castle. In the multiple player mode, friends are allowed to help you build your home.

In this game, you are to construct automated factories to colonize the planet. Satisfactory is not just a building game, it allows you to engage in a little combat.  It even supports the use of vehicles for specific tasks or functions. You can even explore the creations of your fellow players. So you get a taste of action and architecture at a time, which is pretty much like Fortnite, right?

Another one of our best building games like Fortnite is The Darwin Project. This is another last-player-standing game but this time you have to fight other players while trying to survive in extremely cold weather conditions. Once there is a drop in temperature, players have to build fires to keep themselves warm and remain alive. To do this, all you have to do is cut down trees and accumulate appropriate materials for the fire. You also have to hunt for materials for building weapons and other items.

One thing I find interesting about this game is, you get to hunt for other players, find clues that point to their locations, set traps, and even consult maps to disclose their hideout spots. If you love action crowned with architecture and a slice of adventure then you must try this game.

The last of our best building games like Fortnite is Realm Royale. If you’re itching for something slightly different but quite similar to Fortnite, you should try Realm Royale. It gives you the same Battle Royale experience but this time you choose to play as any of five character classes: Warrior, hunter, assassin, mage, or engineer.

Players are also allowed to make use of weapons such as crossbows, sword, etc, and they are allowed to pull down materials that are not wanted and build more effective weapons. Here’s the most interesting part of this game, if you get knocked out, you turn into a chicken waving a white flag. As a chicken, you can escape the fight and run to safety, if you survive long enough, you will be eligible to continue in the match. I think that’s quite funny and exciting.

So if you’re one of those who believe Fortnite is the only exciting Battle Royale game, I’m quite sure I’ve proved you wrong. The aforementioned games are just as intriguing as Fortnite.