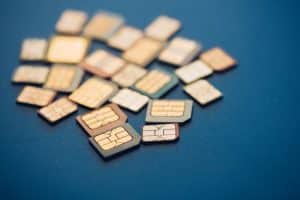 If you’ve recently switched phones, you might be worried about the compatibility of your SIM card on both devices. First, let’s dive into an overview of SIM cards, the types, and if we can find SIM cards universal for Android and iPhones.

SIM cards safely store the service key of the subscriber used to identify themselves to the phone operators. There are mainly three types of SIM cards in use. They are the Standard SIM, the smaller Micro SIM, and the smallest of them, the Nano SIM.

The Micro SIM card was developed to make smartphones slimmer and lighter. High-end brands like Apple and Samsung were the first to introduce the Micro SIM chip on their devices.

Are sim cards universal for Android and iPhones?

No, SIM cards are not universal. In general, you can only use SIM cards from GSM carriers on compatible phones. So, you must check your SIM card to see what size it is, the carrier, the country where the carrier is operating, and confirm that your Android or iPhone isn’t locked to a specific carrier.

On the other hand, almost all phones from the same brand and model tend to have the same SIM card sizes irrespective of the country where said device is being sold.

If not the biggest, Samsung is one of the leading phone brands for Android devices. They are the closest rival to Apple and their iPhone brand. Samsung SIMs also answer the question, “are SIM cards universal for android and iPhones?”. Check out a chart showing the sizes of SIMS and the Samsung devices they are compatible with.

The eSIM appeared in a few of the Samsung models in the chart. They stand for electronic SIM, meaning your SIM card will be available electronically instead of a physical SIM. Most new devices employ this type of SIM card.

Standard SIMs are now looking obsolete with the emergence of the Micro, Nano, and even eSIM cards to put them out of the market. However, some old devices and phones still use the Standard SIM card. Here is a list of popular phone brands that use Standard SIMs.

Read also: Do I Need A New Sim Card and Phone for 5G?

What happens if you take out your SIM card and put it in another phone?

If you save your contacts on your SIM card, they will be displayed when you put the SIM card in the other phone. However, if you do not copy the contacts to your phone, they will disappear once you remove the SIM card.

There are some other things to know. For example, if your device is locked to a specific carrier, inserting another carrier’s sim card may not work. So, if you’d like your device to work universally irrespective of the sim card you insert, you’d either want to unlock or ensure that it’s not locked to any carrier.

Read also: Do I Need A Sim Card in Both Phones to Use Samsung Smart Switch?

Are SIM cards made for specific phones?

Since SIM cards come in three different sizes, the size that your phone accepts will depend on the phone’s brand, size, and date of manufacture. As such, when you want a new SIM card, you need to know which size your phone is compatible with and order one of the correct sizes.

Fortunately, most cellular carriers have handled this issue very well. When you order a SIM card from a popular provider, they’ll give you a Standard-sized one. However, the SIM card will have perforations that allow you to transform it into its Micro or Nano forms by tearing parts off it.

If you use an iPhone or an Android device and you are wondering if there are SIM cards universal for Android and iPhone, then you may have most likely gotten your answer from this article. Standard SIMs are fast becoming obsolete, and it is now the age of micro, nano, and eSIMs.

For more information on the type of SIM card your device is compatible with, check out the specifications on the box. The SIM card may be universal for Android and iPhone, but the device will also determine if it is or not.