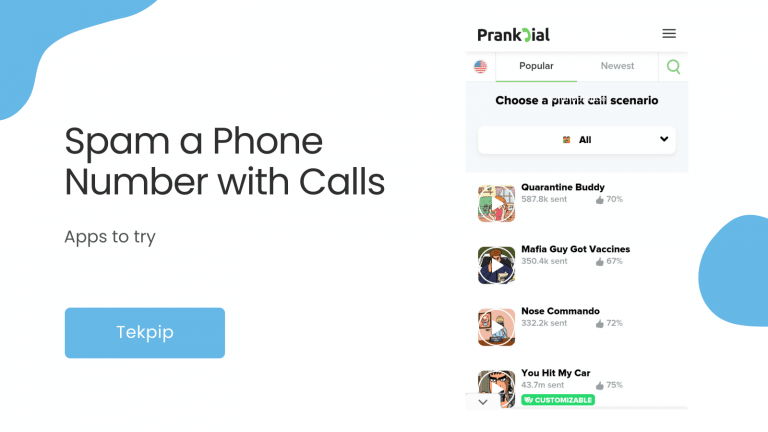 Got a revenge or prank mission to plan? Want to play the next Bart Simpson on a friend or neighbor? Are you looking for a way to spam someone with calls and laugh at how they react to them? Receiving unwanted calls and texts is annoying but fun, especially if you’d like to know how the recipient reacts to them and share them online.

In a separate article, we’ve recently shown you some tricks to sign up a phone number for telemarketing and robocalls. In the post, we also showed you 5 services people use to spam someone’s phone number. But most of the tools shared in the article are online services. Unfortunately, Google recently banned spam apps from the store, so we couldn’t find an app that works for the purpose.

But the good news is, I recently discovered 5 great apps that help spam a phone number with calls. Most are typically prank apps available on the Google and Apple Play Store. But you can use them to spam any number anonymously with calls and SMS in an even more fun and creative way. Imagine freaking out the recipient with a surreal speeding ticket police call.

Disclaimer: Please note that this article is for fun and educational purposes only. We will not be held responsible for what you do with the information therein. In addition, phone number spamming and prank-calling is classified as a second-degree misdemeanor in many states in the US and countries worldwide.

5 Best Apps That Help Spam a Phone Number with Calls

If you like making prank calls, Juasapp may sound familiar to you. But this is an app you should try if you want to spam a phone number too. Juasapp works by selecting some jokes (audio) from those already provided in the application and choosing a phone number. Then the phone number will receive a call with the joke selected. You can do this as many times as possible. But you’ll have to purchase credits for multiple calls. Also, you can make prank recordings to call your friends.

Juasapp is one of the most popular free phone prank and spam apps. Specifically, there are two versions of the tool:

JuasApp – Prank Calls, which is only available for Android, allows you to choose the subject of the prank. For example, you can select a speeding ticket, a police call for illegal downloads, a power outage, etc. Then you need to enter the recipient’s phone number and when to make the call.

The tool will then call that person and save their reactions so you can listen and share them. The problem with the JuasApp – Prank Calls is that it’s only available for some regions. Not even with a VPN!

On the other hand, JuasApp – Jokes Calls is available for iOS. As its name suggests, this tool allows you to send joke calls live or do it yourself.

The process is very simple. First, choose the voice you want the recipient to hear (high-pitched, robot, squirrel, or helium voice.). Then you can enter the contact’s mobile number and automate the call. Finally, the app will record the entire prank so you can listen to it, laugh over it with friends, or share it online.

In both cases, the first call is free, but you will have to purchase calls to continue sending more calls. The price varies depending on the plan you choose.

JokesPhone is another application created for those who like to make fake calls or jokes on the phone. After downloading the app, first-time users will have a free joke to send. However, you can get another free call if you register with your Facebook profile.

If you also recommend Jokesphone to your friends and they make purchases of joke packs, you will receive as many as they buy.

JokesPhone is an app with the same look and feel as JuasApp. To make an anonymous prank, you have to choose the one you prefer from the list (you can listen to examples so you can hear how they sound). Then, enter the person’s number and indicate the day and time you want the prank call to be sent.

Note that the call is made from the company’s switchboard. So the recipient will not be able to identify you. JokesPhone will record the prank, so you can listen to the victim’s reactions and possibly share them via instant messaging or social networks. But I don’t recommend sharing them online, so you don’t end up in trouble for harassment.

JokesPhone is available for free on iOS and Android, and you can download it from Google Play and the App Store.

Another of the most popular free prank and phone number spamming applications is PrankDial. It has a wide catalog of scenarios you can use to make fun of your friends and family. And you can filter it based on its popularity or newness.

Here’s how it works. You download the application, and you will be able to program a fake incoming call. You will be able to put the name and photo you want. When the call comes up once their mobile starts ringing; everyone will believe, for example, that the police are calling the receiver.

The operation is similar to that of other apps. Once you have chosen the prank scenario, you enter the victim’s number, and the system makes the call. After that, you have the option of listening to the joke live. And once it is done, the app records and stores the call in your account. So you can listen to it anytime and share it with whoever you want.

PrankDial is free to download for iOS and Android. You can also schedule a call from the website. Select a prank call scenario, put in their number, and the sending number you want to appear at the other end.

You also have the option to save the reaction of the person. Note that you should only save their response if the receiver is not from the following states: California, Pennsylvania, Florida, Illinois, Michigan, Washington, Maryland, Massachusetts, Connecticut, Nevada, New Hampshire, Montana, New Jersey, Delaware, or the Virgin Islands in the United States.

You can also exclude “You’ve been pranked by PrankDial” at the end of the call by toggling off the function since you’re trying to spam their phone:

Unlike other apps, you can make one free call daily and make many more free pranks than other tools.

PrankDial has a good number of pranks already recorded. So you have to choose the one you want and select the recipient’s phone number. Then, you can listen to and even record the prank once it starts and have a fun time.

Prankster is also an app for spamming a phone number or sending prank calls to friends and acquaintances without spending money. Those who receive the calls will not know who is calling them. This tool puts at your disposal a large archive of pre-recorded jokes. You can choose the one you prefer and send it anonymously.

To get started, you have to select the type of prank you want to use. Then enter the phone number of the person you want to spam their phone. If you have it in the contact list, you can select it from there.

Once you have sent the call, wait for the person to answer it. Then, when the joke is over, that is, when the other person has finished the call, Prankster will save the recording directly in the calls section of your smartphone.

So you can listen to it and laugh as many times as you want at the reaction of the person you have played the prank on. You can also share it on applications such as WhatsApp, Facebook Messenger, Viber, or Vine.

Prankster offers you two free calls for the start. And if you want to continue pranking, you need to buy calls. The amount per prank varies depending on the call pack you choose.

Read also: How to Divert Calls to Another Number

If you want to spam phone numbers or make prank calls for free, another application you can download is Prank Calls and Dials, also called Vacilapp. Vacilapp is one of the most downloaded prank applications. It’s been downloaded more than a million times. And it’s light in size (just 16 megabytes).

Prank Calls and Dials has a series of credits you can spend on pranks you want to use to call your contacts. Depending on the type of joke and duration, you will consume more or fewer credits, although you can get more as a bonus.

The interface is less friendly than other prank apps, but the functions are more or less the same.

The process of sending a prank call is similar to other apps. In the first tab, you can see all the available catalogs of recordings. And when you find the one that amuses you the most, click on the Play prank (Demo) button.

Next, enter the receiver’s phone number, select the date and time and indicate if you want the call to be recorded. When the prank ends, if you have checked the box to record the call, you can listen to it and share it with whoever you want.

Prank Calls and Dials is available on iOS and Android for free. The app offers you a free call, and you will need to buy credits to make more pranks.

Read also: How to Lookup and Find Someone’s Name by Cell Phone Number For Free

I’ve shown you the 5 best apps that help spam a phone number with calls. This topic is less seen online, and it’s due to its sensitivity. So I implore you to use the apps responsibly. Make sure the person you’re calling lives where there is no legislation against these apps.

How phone call spam and prank apps work are almost identical. This type of tool puts a file of pre-recorded audios of different scenarios at your disposal. You can select the one that is the most fun for you. Then, by entering the receiver’s phone number and programming the date and time of the call, you can schedule the call. First, you’d have to buy credits for sending as many calls as possible. Otherwise, you can use online services such as Wackyprankcalls.com or sign up the phones for robocalling or telemarketing, as explained in the previous article I mentioned.