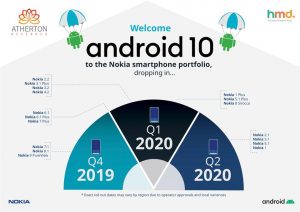 So you have been expecting the Android 10 update on Samsung Galaxy A9 and the Nokia 7.2. You can take comfort in knowing that these companies have finally started rolling out the update, and you’ll be seeing these updates in the coming weeks.

What should you expect from the Android 10 update on Nokia 7.2 and Galaxy A9? Let’s take a brief look at each of the phones and the features of the Android 10 as a whole.

Android 10 comes with some pretty cool features, like a new system-wide dark theme (which means you can now enjoy your dark theme throughout the phone), Gestural Navigation, Digital wellbeing features like focus mode, family link and much more. To get a comprehensive list of the Android 10 upgrade, check out this Google post.

Here is a screenshot that shows exactly how to upgrade to the Android 10 on your Nokia 7.2. You will notice that the update is considerably large, a whopping 1.57GB.

Remember best practices that encourage that your device does not get below 50% when carrying out an upgrade, so try to have your battery fully charged, or better still have it plugged while you do the Nokia 7.2 Android 10 update.

We are rapidly seeing a change in the industry and Samsung’s business style, and this Android 10 upgrade attests to all that we think about the company. The company is increasingly providing support for older smartphones, and with the release of the Android 10 update for its flagship devices, the company is making it easy for some of us to use our favorite smartphones and still enjoy the latest updates from Android.

The Samsung Galaxy A9 (2018) will be having the Android 10-based OneUI 2.1 update. This firmware comes with the A020FXXU3CTCD serial, and it’s now available in Poland for the SM-A920F Global variant.

This means the company has moved ahead of its original schedule, but I think it’s still great since the Samsung Galaxy A6 and A7 from the same year now have this Android 10 upgrade.

If you own the Samsung Galaxy A9 (2018) you should get a software update notification from the company. You might also decide to go to Settings>Software Update>Download and Install to look for a software update manually.

As with every phone, please ensure that the phone battery is charged well over 50% before applying the software update so as not to cause damage to your device.

This picture shows a list of devices we expect to come with a much-expected Android 10 upgrade.